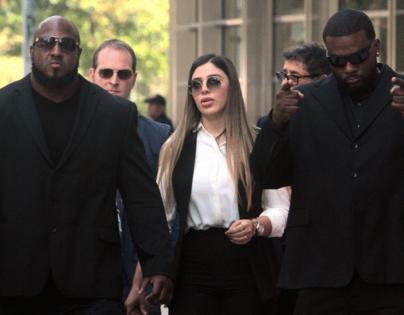 Emma Coronel Aispuro, 31, pleaded guilty to drug trafficking and money laundering in D.C. federal court nearly four months after she was arrested trying to board a plane at Dulles International Airport in Virginia.

“She’s happy to put this behind her and get on with her life and get back to her children,” Coronel’s attorney Jeffrey Lichtman told the New York Daily News.

Lichtman described the plea as “arm’s length” and said Coronel is looking at significantly less time in prison than her drug lord husband — who she married at 18 — as it’s her first offense.

Coronel’s attorneys, Lichtman and Mariel Colon Miro, were both on El Chapo’s defense team at his 2018 trial in Brooklyn.

Coronel pleaded guilty to to conspiring to distribute heroin, cocaine, marijuana, and meth to be imported into the U.S. between 2012 and 2014, conspiring to launder her husband’s cartel proceeds, and other related charges.

The conviction is the first for Coronel, a California-born dual Mexican citizen who’s maintained close proximity to some of the world’s most prolific drug traffickers since birth.

Ines Coronel Barreras, her father, was a high-ranking member of the Sinaloa cartel and was sentenced to 10 years in a Mexican prison in 2017 on marijuana trafficking and firearms charges. Her uncle, Ignacio “Nacho” Coronel, was also a top Sinaloa lieutenant who did business with Guzmán. The Mexican Army killed him during a shootout in 2010.

Coronel, who faces a minimum of 10 years when she’s sentenced, is in protective custody in federal lockup and may only leave her cell two times a day, Lichtman said.

Her situation is not all that different to Guzman’s at ADX Florence in Colorado — a supermax prison architecturally designed in such a way that inmates will never see trees or terrain again.

Coronel was a permanent fixture at her husband’s Brooklyn trial, though the pair haven’t spoken since his extradition to the U.S. in 2017. The judge overseeing his case would not permit them an embrace in the courtroom despite dozens of motions from his legal team. During one day of the trial, they each turned up in matching velvet jackets.

El Chapo was convicted of more than a dozen felony charges on Feb. 12, 2019, including money laundering, conspiracy, firearms and international drug trafficking. He was sentenced to life in prison plus 30 years and ordered to forfeit $12.6 billion.