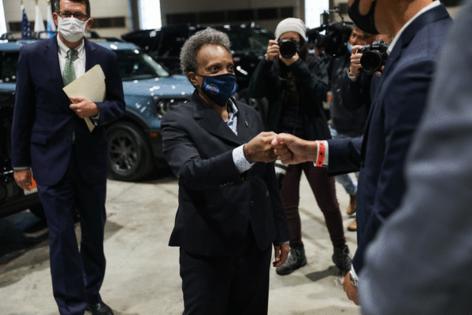 CHICAGO — Mayor Lori Lightfoot on Tuesday said she plans to fully reopen the city of Chicago with no capacity limits by July 4, potentially opening the door to bigger events and festivals if the city continues to see progress in its COVID-19 numbers.

“We will be one of the first cities to fully and safely reopen,” Lightfoot said at a news conference where she joined other officials to hail the auto show’s return to McCormick Place.

The mayor said she was at Navy Pier Saturday night and was impressed by “the level of enthusiasm” from the people there, who were enjoying a fireworks show while being masked and following social distancing rules.

“We’re seeing on a daily basis steady progress in all the metrics that we follow,” including case rates and positivity, she said. City modeling suggests Chicago will continue to improve, which will allow further reopening, Lightfoot said.

Lightfoot announced her goal days after relaxing pandemic rules on indoor gatherings by expanding the number of people allowed inside bars, restaurants and churches, reopening large venues like the United Center and boosting capacity at outdoor festivals and farmers markets.

Lightfoot’s plan may sound optimistic, but if current trends hold, the state could move to full reopening under Gov. J.B. Pritzker’s revised plan by early to mid-June.

Pritzker said Monday that Illinois is on track to enter the “bridge phase” of his plan as soon as next week, though the state Department of Public Health declined to give a specific day.

Once the state is in the bridge phase, which includes higher capacity limits on a wide range of businesses and activities, Pritzker’s plan calls for a 28-day monitoring period before all limits and restrictions are lifted. That’s assuming coronavirus cases and hospitalizations remain stable or decline. The governor has said the state will leave its mask mandate in place until the Centers for Disease Control and Prevention gives the OK to lift it.

In the bridge phase, businesses in a wide range of categories, from offices to retailers to gyms, would be allowed to operate at 60% capacity, up from 50%. Amusements parks, museums and zoos would also rise to 60% capacity from the current 25%.

Ticketed and seated spectator events, as well as theaters and performing arts, also would have a 60% capacity.

Additionally, indoor social events would have a maximum capacity of 250 people, while outdoor event capacity would rise from a maximum of 100 to 500 people. Festivals and general admissions for outdoor spectator events would increase from 15 people per 1,000 square feet to 30.

But Pritzker said Tuesday that although he’s optimistic about where the state is in its efforts to slow COVID-19′s spread, “we can’t predict the future, and this virus has proven to be very challenging.”