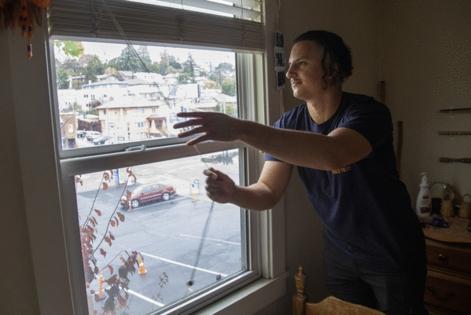 Diego Villegas had no illusions that leaving Mexico City to pursue a graduate degree at University of California-Berkeley would be easy. But he was unprepared for the harsh reality of finding safe and affordable housing in a college town struggling to accommodate its growing student population.

After a faulty air conditioner set fire to his first rental, Villegas slept on couches for months while frantically searching for a new place to live. The school helped by getting him into scarcely available student housing, but he could barely afford the cramped studio apartment. He’s since moved to a shared house in Oakland where the $1,000 monthly rent is over three-quarters what he earns grading papers for university classes.

Villegas, 27, is one of roughly 48,000 University of California graduate student workers and academic employees at campuses across the state who walked off the job last month, demanding higher wages to ease the strain of mounting housing costs. While two of the four bargaining groups representing nonstudent employees recently reached an initial deal with UC, student workers such as Villegas — who make up the large majority of strikers — have not.

But even a new contract won’t solve a widespread student-housing shortage that has long pushed UC students into competition for expensive and sometimes dangerous off-campus apartments and shared houses — driving up rents and fueling local concerns about overcrowded neighborhoods and gentrification.

Nowhere is that more apparent than in Berkeley. Despite recent efforts to add university apartments, the school housed just 8% of its graduate students and 30% of its undergrads on campus in 2020 — the fewest of any UC school — according to the latest available university data. For the current fall semester, UC Berkeley has over 45,000 students, about 12,000 of whom are graduates, but only 8,485 on-campus beds.

Officials with the United Auto Workers union — which represents the striking teaching assistants, academic and student researchers, and postdoctoral scholars — are touting the work stoppage as the largest in UC history. It’s halted most in-person classes across the 10 UC campuses ahead of final exams scheduled this month.

On Tuesday, as the strike entered its third week, the bargaining group representing 12,000 nonstudent researchers and postdocs reached a tentative agreement that includes pay raises and other benefits. But the remaining 36,000 lower-paid graduate-student workers are still in negotiations.

All union members, some of whom have begun occupying the UC Berkeley chancellor’s office, are vowing to continue the strike until student workers reach a deal that reflects the high cost of housing and other workplace accommodations.