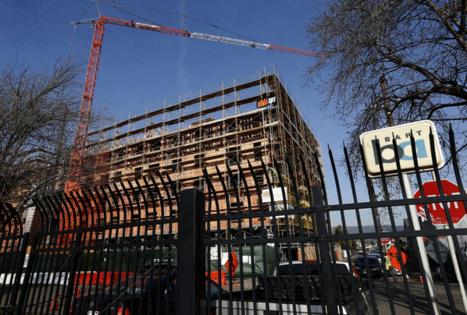 When voters in Oakland, Berkeley and South San Francisco, California, receive ballots in the mail next month, they’ll be asked whether their cities should be allowed to help build more desperately needed affordable housing.

The reason for seeking voters’ permission? A 72-year-old provision in the California Constitution requiring local governments to get community approval before developing, buying or funding “low rent housing” – a law voters across the state will choose whether to repeal in 2024.

Article 34, passed by a statewide ballot initiative in 1950, has blocked affordable housing for decades while creating costly hurdles for developers and local officials who want to build homes for low-income residents. The amendment was the result of a successful campaign by the state’s real estate industry, which drummed up racist fears about public housing and neighborhood integration.

“There was a time, and it still exists today because of (this provision), where it was OK to just blatantly say we don’t want Black people in our neighborhoods – and that’s the legacy of Article 34,” said Oakland City Councilmember Carroll Fife, who introduced the city’s affordable housing measure.

If approved, the three local measures would clear the way for new government-developed housing, as well as for additional affordable homes built by private developers that receive public funding, a far more common way to create low-income housing.

Oakland’s ballot measure would allow 13,000 additional affordable units. Berkeley’s would greenlight 3,000 low-income units. And South San Francisco’s measure would allow new affordable homes totaling 1% of existing units in the city limits each year for an eight-year period. None would approve or dedicate funding to any individual developments.

Opponents, including residents and taxpayers groups, say the measures will inevitably lead to misuse of public funds. The Alameda County Taxpayer Association described the Oakland measure as an effort “to make the voters believe that something good would actually result, rather than more waste and misuse.”

While such measures tend to pass in the Bay Area, housing advocates say Article 34 still triggers unnecessary costs and delays for developers who must comply with the law and for local governments needing to fund elections in order to plan for new affordable housing.

“It creates significant barriers to our ability to solve our housing crisis, because it makes it a lot harder to build publicly funded housing for low-income people,” said State Sen. Scott Wiener, a Democrat from San Francisco, who co-sponsored a bill to repeal Article 34.

Wiener’s bill, overwhelmingly approved by lawmakers in August, will put a statewide measure on the 2024 ballot asking voters to eliminate the “completely racist provision.”