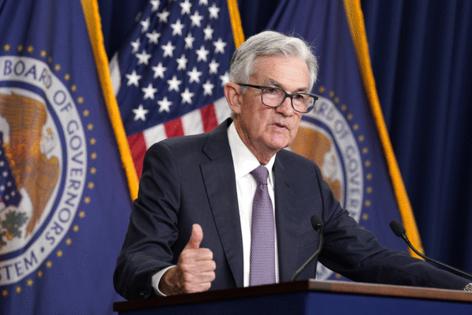 The Federal Reserve is inching toward acknowledging how painful its inflation fight is likely to be, but it’s still a lot closer to the optimists than the pessimists.

On a day when it raised interest rates by 0.75 percentage point to a range of 3% to 3.25%, the Fed also released economic projections showing that its median forecast for unemployment is 4.4% by the end of 2023, up from the current 3.7%, meaning more than a million fewer jobs as a result of its campaign. That marked an increase from previous projections in June that showed unemployment peaking around 4.1%, which were widely panned as unrealistic. Yet the numbers still look rosy compared with the labor-market damage that historically accompanies rounds of aggressive monetary policy tightening.

For the Fed, the projections are a balancing act between economics and public relations. The central bank is fighting the worst inflation in four decades, and economic orthodoxy suggests that the overheated labor market is creating upward pressure on wages and consumer prices. As that thinking goes, the only way to break the cycle is to send unemployment higher — a barbaric principle on the face of it that many Americans would deeply object to if they could see through the opacity of the central banking process and its web of economic jargon. Yet for better or worse, there’s virtually no hope that policy makers will concoct a better way of tackling inflation anytime soon.

Among the prominent backers of this orthodoxy are former Treasury Secretary Lawrence Summers and former International Monetary Fund chief economist Olivier Blanchard. Speaking this month on a Goldman Sachs Group Inc. podcast, Blanchard said that unemployment probably needs to rise to at least 5% in an optimistic scenario and possibly as high as 6% to 7%. Blanchard, Summers and co-author Alex Domash are far more pessimistic than the median Wall Street economist in a Bloomberg survey, but they argue that they have history on their side. Optimists say that this economic cycle is highly distinct, precipitated by an unprecedented pandemic, and that the Fed’s actions may prompt companies to reduce job openings without necessarily laying off many workers. That, optimists say, would bring down inflation with limited pain.

Enter Fed Chair Jerome Powell, who appears to be trying to meet the doomsayers and Wall Street somewhere in the middle (albeit still more oriented toward the latter). In response to a press question from Bloomberg’s Michael McKee, Powell said he didn’t know what the odds of a recession were but noted that the economy should continue to run at a slower-than-normal pace:

"There’s a very high likelihood that we’ll have a period of what I’ve mentioned is below-trend growth, by which I mean much lower growth. And we’re seeing that now … that’s a very slow level of growth, and it could give rise to increases in unemployment. So that is something that we think we need to have, and we think we need to have softer labor market conditions as well."

The Fed’s new median projections for 2023 and 2024 are slightly more pessimistic than the median Wall Street economist, but still far more sanguine than the type of damage that Blanchard and Summers foresee. Of course the rate-setting Federal Open Market Committee has a range of views, with governors and regional Fed presidents submitting unemployment forecasts from 3.7% to 5% by the last quarter of 2023, up from a previous range of 3.2% to 4.5% in the June projections.

Overall, the Fed’s economic projections should never be taken literally. Although the FOMC would never say so outright, its projections are as much about managing expectations as they are reflections of where it sees the economy going. But at face value, they signal a move away from full-scale wishful thinking toward plausibility, and that’s at least a positive development toward leveling with the American people.

Jonathan Levin has worked as a Bloomberg journalist in Latin America and the U.S., covering finance, markets and M&A. Most recently, he has served as the company's Miami bureau chief. He is a CFA charterholder.

Federal bank regulators' efforts to modernize the 45-year-old law known as the Community Reinvestment Act to reflect the rise of digital banking are raising accusations of partisanship, a claim that those digging into the ...Read More

Boeing told nonunion corporate staff in an all-hands virtual meeting this month that it will begin outsourcing finance and accounting jobs to Tata Consultancy Services of India.