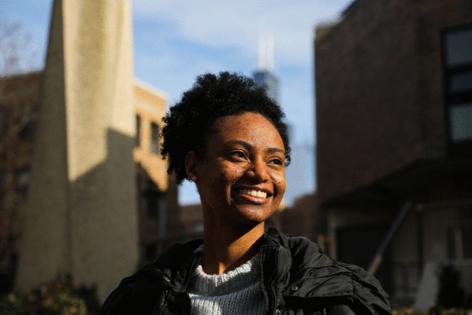 University of Illinois Chicago graduate student Martina Smith has always been curious about buildings. Growing up in Jamaica, a colorful structure that she called “the cake house” sparked her curiosity at the age of 7. Because she loved art and math, her father suggested that she try her hand at architecture. The Richton Park resident has been on track to become an architect ever since.

With plans to graduate in 2024 with a degree in architecture from UIC’s College of Architecture, Design, and the Arts, Smith wants to eventually open up her own firm and put her building skills to work in marginalized communities.

“I feel like they don’t really get that much attention as other communities do,” she said.

Smith is the first recipient of the Hartshorne and Plunkard Fellowship, a new annual award given to a UIC architecture graduate student. She received the award in September, which comprises $10,000 in financial assistance for up to three years of graduate study, academic and professional mentoring, and a paid summer internship at Hartshorne Plunkard Architecture in Chicago. UIC alumni Raymond Hartshorne and James Plunkard committed $500,000 to create the endowed fellowship, which aims to increase diversity among students obtaining a UIC architecture education and diversify the talent pipeline into the architectural profession. The endowment will support two graduate architecture fellows in perpetuity.

“Our idea was making this fellowship graduate-specific would address not only the pipeline at the beginning of that undergraduate level, but also the attrition that happens as you move up the ranks in architecture where diverse students become a smaller and smaller portion of the represented group as you get into graduate programs and the professional field,” said Olivia Woolley, assistant director of advancement at the College of Architecture, Design, and the Arts. “Ray and Jim thought if they could alleviate some financial burden by providing major tuition support to a graduate student that would help them get through the program, then they would graduate into a field ready to be that diverse candidate that the industry is looking for.”

The fellowship is but one move being made in Chicago to diversify the architecture field. Tiara Hughes, a Skidmore, Owings & Merrill senior urban designer and project manager, launched the First 500 website in October. Hughes said the site’s sole purpose is celebrating and elevating Black women in architecture, who make up less than 1% of licensed architects. Unlike Smith, who attends architecture classes with students from many different backgrounds, Hughes, a St. Louis native, was often the only female in her Drury University architecture classes, and the only student of color.

“Honestly, the only architect that I can think of watching growing up, was the dad off “The Brady Bunch,” And that’s not our representation,” Hughes said. “I felt a little isolated and a bit deprived from my education.” The experience prompted Hughes to move to Chicago, where she has been able to to meet Black women architects and be introduced to the National Organization of Minority Architects.

“It was a bit of a shocker when I dug deeper to learn that in 2017 there (were) between 115,000-116,000 licensed architects living in the U.S., and less than 500 of them were Black women,” Hughes said. “That’s when I founded the First 500 — the three pillars being raising awareness, resourcing, and building a strong community.”

Hughes named the website First 500 to be a visible marker around the shocking representation of Black women in the field. “People were able to quickly wrap their minds around what Black women represent in this field, and how it’s unjust,” Hughes said.

Hughes, 30, has traveled the country talking about the low number of BIPOC architects, encouraging and inspiring young girls to enter the field and reiterating to Black females who are in the field that they belong there. The Woodlawn resident hopes the site serves as a touchpoint for young girls and women of color throughout their career. Profiles and contacts of existing Black female architects are present on the site, as are resources for those regardless of where one is on their architectural journey — from young girl to licensed professional.

Every day, Dr. Alan Hutchison has to decide which medications to prescribe to patients. But it’s not always as simple as just choosing the best drug.

As a physician to many low-income patients at University of Chicago ...Read More

The imposing, battery-powered Bollinger B2 pickup truck won't be seen on the road anytime soon.

The Michigan-based startup announced Friday that it is canceling consumer orders for its innovative, off-road-capable B2 ...Read More