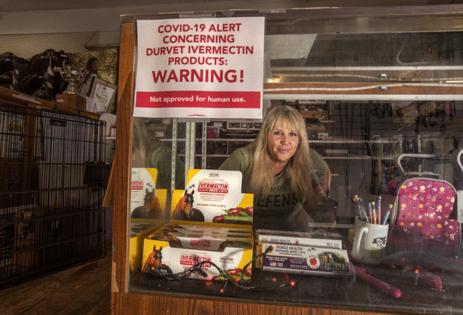 A Texas appeals court has just punched a hole in the emerging trend of judges ordering hospitals to treat COVID patients with the drug ivermectin.

"Judges are not doctors," Appellate Judge Bonnie Sudderth wrote in a unanimous three-judge decision issued Nov. 18. "The judiciary is called upon to serve in black robes, not white coats."

The appellate panel overturned a trial court injunction requiring a Fort Worth hospital to allow a dying patient to be treated with the drug.

The case involved the care of Jason Jones, 48, a Fort Worth-area police officer who was hospitalized with COVID in late September and refused conventional treatments, including the antiviral drug remdesivir.

Jones ended up on a ventilator in the ICU of Huguley Hospital in Fort Worth. As of Nov. 18 he was in a medically-induced coma, with the expectation that his condition is terminal, according to the court decision.

The Jones case was notable because a trial judge ordered the hospital to allow the patient to be treated with ivermectin. It's one of several lawsuits around the country in which judges have ordered hospitals to clear the way for the treatment.

Most of these cases — including the Jones case — have been brought by Ralph Lorigo, a Buffalo-area lawyer.

Lorigo, who says he has been retained in more than 100 lawsuits in more than 25 states by patients or family members seeking ivermectin treatment, called the Texas decision "terribly wrong." He said whether to appeal the decision to the Texas Supreme Court is up to the Jones family, which hasn't yet decided.

"I want to take this to the U.S. Supreme Court," he says of the issue of whether patients should have the right to demand the treatment.

As I've reported, this emerging trend of judicial activism has raised concerns in the medical community because no validated scientific evidence exists that ivermectin is at all effective against COVID-19. (A human preparation of ivermectin can be used in limited cases against parasitical diseases and as topical relief for the skin condition rosacea.)

Entertainment giant AEG plans to raise hundreds of millions of dollars to help fund a planned expansion of the L.A. Live hospitality complex in downtown Los Angeles by selling part ownership in the Ritz-Carlton and JW ...Read More

The first potential glitch of tax season involves new concerns about the accuracy of some letters that the IRS is sending out relating to the child tax credit.

A lawsuit filed in U.S. District Court seeks to force the Nuclear Regulatory Commission to hand over unredacted documents regarding an incident in August 2018 when a 50-ton canister filled with nuclear waste from the San ...Read More