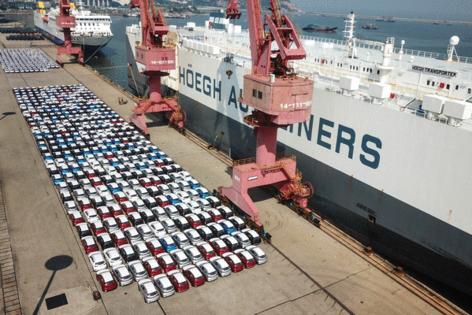 Officials from Australia, Malaysia, New Zealand and possibly other nations have held technical talks with Chinese counterparts on details of the Comprehensive and Progressive Trans-Pacific Partnership. That’s according to officials from four member countries with knowledge of the discussions, who asked not to be named as they weren’t authorized to comment on the talks.

China announced in February it had held informal talks with some of the members, but didn’t release details. It’s not clear how far China has progressed in preparing an application, but the people see Beijing as seriously interested in joining, with multiple officials pointing to comments last year from President Xi Jinping as an indication of intent.

China “would not have made a statement about joining TPP if they had not already studied this menu and said, ‘actually, we’re happy with that,’” said Deborah Elms, founder and executive director of the Asian Trade Centre in Singapore.

The Trans-Pacific Partnership was envisioned by the U.S. as an economic bloc to balance China’s growing power, with then-President Barack Obama saying in 2016 that the U.S., not China, should write the regional rules of trade. His successor Donald Trump pulled out of the deal in 2017, with Japan leading the revised and renamed pact to a successful conclusion the following year.

Beijing has “done a lot of preliminary work and made some informal contacts,” Commerce Minister Wang Wentao said in early March. “We’re stepping up efforts in this area.” The ministry did not respond to a request for more information on the progress of talks.

Many of the CPTPP nations are heavily dependent on trade with China, but China’s increasingly poor image in some nations may make it harder to agree on entry. Concerns over labor practices, state-owned companies and its economic confrontation with America also loom as potential roadblocks for entry.

If it does join, China would become the largest economy in the partnership and further cement its position at the center of trade and investment in the region. Beijing already helped lead a separate regional trade deal known as RCEP to a successful conclusion last year, but joining the CPTPP would require it to make additional concessions and gain the agreement of all 11 members — including Australia, Canada and Japan, U.S. allies with which it has increasingly difficult relations.

Any application by Beijing is likely far off, as the members are currently working through the U.K.’s application and China is still examining the requirements. Various Chinese government departments, think-tanks and academics are analyzing the text to figure out what needs to be done to join, and studying the attitudes of member nations, according to some of the foreign officials.