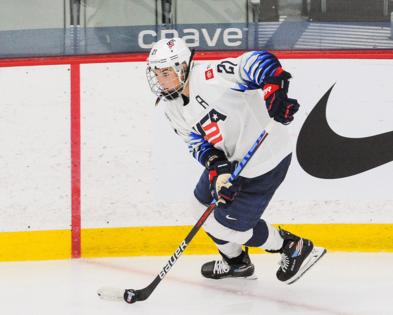 Still, Knight, who grew up in California and went to Choate prep in Wallingford, Conn., is not exactly thinking in terms of her last Olympic Games or retiring or anything like that just yet.

“Who knows?” Knight said. “I don’t know. We’ll see. We got to that world stage [in 2018]. Winning the last Olympics was outstanding, incredible. You kind of feed off that and you want to go do it again.”

Team USA lost to Canada on Friday night in the first game of the tour in Allentown, Pa., 3-1.

This summer, Knight became the leader in career goals at the women’s world championships when she scored her 45th goal, against Russia. The U.S. lost to Canada 3-2 in overtime in the final.

Knight is just happy to be back together with the national team after the pandemic shut down the sport for a while. She was also sidelined 10 weeks in the winter after foot surgery.

And she’s happy to be back in Connecticut, where she has fond memories of Choate, from which she graduated in 2007.

“I have to give that experience so much credit for who I am as a person, for preparing me to succeed,” she said.

She also played for the Polar Bears, an elite girls hockey team in Connecticut.

Beyond omicron and gold medal tallies, athletes arriving in China’s capital for the Winter Games next month may have one more thing to worry about: Is it safe to access the internet?

Deon Lendore, a sprinter who won a bronze medal at the 2012 Summer Olympics, died Monday.

The 29-year old, who raced for Trinidad and Tobago, was involved in a automobile collision in Texas.