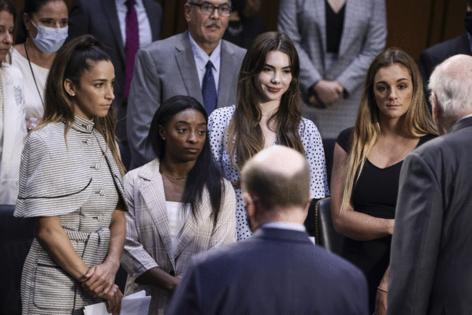 In a letter to two U.S. senators, Olympic gymnasts Simone Biles, Aly Raisman and McKayla Maroney and NCAA gymnast Maggie Nichols said they are making the request after "years of patience, deliberation and unrequited commitment to learn from our suffering and make amateur sports safe for future generations."

"We believe the board's past actions demonstrate an unwillingness to confront the endemic problems with abuse that athletes like us have faced and a continued refusal to pursue true and necessary reform of the broken Olympic system," they wrote.

The gymnasts said high-ranking USOC officials who presided over the organization while Nassar was abusing young athletes remain in positions of influence at the committee and its foundation.

"Respectfully, we believe it is time for Congress to exercise its authority over the organization it created by replacing the current USOPC Board with leadership willing and able to do what should have been done long ago: Responsibly investigate the systemic problem of sexual abuse within Olympic organizations — including the USOPC — and all efforts to conceal it," the gymnasts wrote.

"Unless and until this happens, nothing will change, excuses will continue, and athletes will remain at-risk."

Biles, Raisman, Maroney and Nichols all testified last month before the Senate Judiciary Committee during a hearing about the FBI's failed initial response to the allegations against Nassar, who was a sports doctor at Michigan State University and team doctor for USA Gymnastics.

They told lawmakers they blamed FBI and Olympic officials for covering up Nassar’s abuse, demanding accountability after he was allowed to continue molesting girls for over a year after the FBI was first alerted to his crimes.

In response to the gymnasts' letter, the U.S. Olympic Committee issued a statement that it has "deep respect and empathy for survivors of abuse" and that it remains "fully committed to addressing sexual abuse at every level of sport and implementing the necessary safeguards to ensure the health, safety and well-being of our athletes."

The committee said over the last two years it has implemented the "most sweeping governance reforms in nearly two decades." It also pointed to the report produced by the law firm Ropes and Gray, which was commissioned by the USOC to investigate the Nassar allegations and pointed out the group has cooperated with congressional investigations.

"All of this has led to significant widespread changes to prevent such reprehensible acts from ever occurring again," the statement said. "Additionally, the USOPC supports the U.S. Center for SafeSport, a congressionally authorized, safe and confidential entity to report abuse and other misconduct."

Under a bill passed by Congress last year, Congress does have the power to dissolve the Olympic Committee or individual sports governing bodies in the face of clear evidence that they are unable to hold themselves accountable. That power becomes effective Nov. 1.

Such a resolution would have to pass both chambers and be signed by the president, according to Sens. Richard Blumenthal, D-Connecticut, and Jerry Moran, R-Kansas, who sponsored the legislation last term.

“We’re grateful to these athletes for their continued demand for justice and accountability — a goal we share," Blumenthal and Moran said in a statement in response to the gymnasts' letter.

"We look forward to continuing our work together to ensure that USOPC is held responsible for past failures.”