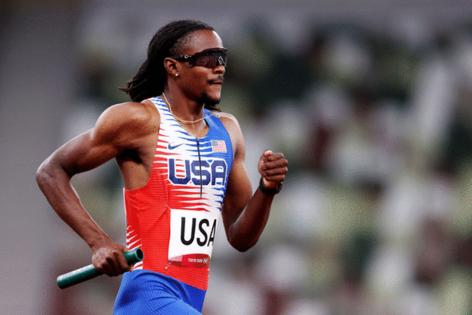 RALEIGH, N.C. — Randolph Ross emerged from the Tokyo Olympics as one of the games' cautionary tales. He became a personification of the pitfalls of competition at the highest level, where one misstep, physical or mental, can destroy a dream in a fraction of a second.

He also emerged with a gold medal for his work in the 4x400-meter relay — he was part of the quartet that won its heat before other runners took first in the final — to wipe out some of the individual disappointment.

"They're not the most comfortable around your neck," Ross joked Tuesday in a press conference at North Carolina A&T, where the Garner native is a rising junior.

Ross envisioned coming home with a medal when he left for Tokyo, perhaps not exactly this one. It was in the 400 where he hoped to shine. Even the British announcer on the world feed called him "one of the standout stars of the U.S. team, 20 years of age," and his opening race on Aug. 1 was merely a warm-up for the fireworks yet to come. Ross' personal best was almost a half-minute faster than anyone in his heat, leaving him expected to advance easily.

Out in front most of the way around the track thanks to his head start on the curve in the outside lane, Ross fell as far behind as fifth on the final stretch, then picked up the pace to get just into third, safely into the next round. That should have been enough.

But with about 10 meters to go, Ross let up. His final five strides visibly shortened as the runners to his left surged forward. Two lanes to his left, Switzerland's Ricky Patrucciani leaned forward ahead of Ross at the line to nip him for third.

It was a disappointing end to a long season of running that included an NCAA title. Ross didn't run to his own expectations at the U.S. Olympic Trials, but it was still good enough to make it to Tokyo. His legs may not have been everything he hoped they would be by the time he got there, but it wasn't his legs that let him down in the end.

And that was it for Ross' medal hopes as an individual, over before they really started. His time wasn't good enough to advance as a wild card, and he knew it.

"It sucks," was his concise appraisal in an interview with NBC immediately afterward.

But his father, A&T track coach Duane Ross and an Olympic medalist himself, knew his son's Olympics weren't over yet.

"Not running to what I was fully capable, it was more upsetting to me than him," Randolph Ross said. "He was more my support system, getting in my head, getting me focused for the upcoming relays."

Five long days later, Ross took the baton from A&T teammate Trevor Stewart to run the second leg of the United States' qualifying heat in the 4x400 relay. The United States was third when Ross took over. He took the lead in the final straight, handed off the baton in first and the U.S. never trailed again, safely through to the final. The next night, three different U.S. runners won gold by more than a second, an eternity, as Ross watched.

"Having the second opportunity to run the relay and on that stage that level, I wouldn't say it's something I thought I wouldn't get to experience, but there were times where they weren't going to have me on the relay," Ross said. "So getting to run and represent the U.S. on the relay and come home with a gold medal, it's a great feeling."

This is still just the beginning for Ross, who despite his finish-line flub is still one of the brightest U.S. track stars. He has three years yet to prepare for Paris, where relay gold won't be the only medal he'll be expected to bring home.