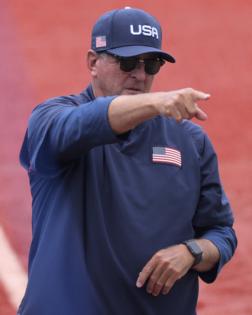 A ring, commemorating his club’s runner-up finish in the Olympics.

After an Olympic odyssey he describes as tense and tedious, sequestered and sweltering, Eriksen returned home July 29 with a shimmering piece of jewelry, enormous pride in his team’s resilience, and a bit of disillusionment regarding these Games. He conveyed his candid thoughts in a phone conversation with the Tampa Bay Times. Here are excerpts from that chat (edited for length and clarity), in question-and-answer form:

Q: You’ve spoken about the the mental and emotional toll of your team getting jacked up to play, getting shut down (the Olympics were postponed for a year due to the global pandemic), getting jacked up again, then finally competing. Can you just speak to the effect that had on your players and staff?

A: “It was pretty tedious. There was no opportunity to blow off steam, there was no opportunity to get away from being under lock and key in the (Olympic) village. You weren’t able to eat outside your village at all, you weren’t able to go to certain places when you were in the village. And those people that stayed in the periphery hotels had to be confined kind of to the hotel areas. There were no opportunities to go out to dinner, and everywhere you went, people that were volunteers for the Olympics were like, ‘No, you can’t do this. No, you can’t do that.’ Even at the ballparks, it was like, ‘No, this is restricted, that’s restricted.’ It was really a lot different than it was in 2004 (in Greece, where the U.S. won gold).”

Q: Did you get a general sense that the Olympics weren’t necessarily wanted at this point in time by the people of Japan?

A: “No question about it. You had obviously a very high percentage — which was 65-plus, 70 percent — that did not want outsiders coming to the country in a state of emergency. You think about the amount of people inside the village that brought COVID in. And whatever the ramifications are going to be over the next month, month and a half, from people that were working there that got the (delta) variant even if they were vaccinated. ... So those are the questions that are coming up, but I do know right now that the prime minister of Japan is not a very popular person.”

Q: You had players on your team who are wives and mothers. Could you tell the impact of the isolation on your players, whose families and loved ones were a world away?

A: “It was tremendous. We had staff members that were in the same boat. We were on the road for five or six weeks, and then having to go through not-normal routines, and having to get up every morning and go to a COVID test, and then the anticipation of hoping everything comes back (negative). ... You couldn’t even have certain personnel — your strength coordinators, your sports psychologists — go because there were limited numbers. I mean, we had staff that weren’t even allowed to watch the ballgames; they couldn’t even go to the stadiums. So it was really, really different, and I’m not saying it was wrong because of the pandemic. I don’t think the people that made the decisions actually had any idea of what elite athletes go through.”

Q: You’re extremely meticulous in your preparation, but was there anything about this experience that caught you off-guard?

A: “The limitations on what we were allowed to do practice-wise at the venues. It was different. It was really, really different. There were a lot of restrictions with respect to the amount of time you had to get to the place to get ready for practice, the amount of time you had afterward; they were rushing you out of there. And it wasn’t just us, it was all the softball teams there. It wasn’t conducive to how you prepared and how you trained for what it was supposed to be like. ... Thank goodness for the flexibility and the adaptability of the players and the coaching staff, but it throws you for a loop. Did it affect our productivity? No. Was it inconvenient? Yes.”

Q: In your opinion, should these Olympics have been played?

A: “That’s a question that I think I keep asking myself. And to me, when I keep asking myself that question, I keep trying to come up with the reasons that it was played. Money keeps coming to the top of the reasoning why it was played. Common sense seems to have been put to the wayside of that. ... It was a once-in-a-lifetime opportunity for a lot of athletes, but at what cost was it in the mental-stress parts of it, and also in the health aspect of it? I think I’ll probably over the next 15, 20, 25 years keeping asking was it worth it for that? I will tell you this once again, and not to belittle any aspects of how great world competition is, but it was a lot different than 2004, which was so enthusiastic, so energy-wise. This was very, very tedious and really a mental strain on a lot of people.”

Q: Are you now retired from international competition?

A: “As of today, on the 13th of August, I have no more plans to be coaching internationally. ... I’ve been asked not to completely retire, but I’m really looking forward to going out there and making sure the routines of my yard are up to date. I’m actually really looking forward to getting back to the player-development and pure teaching of 18- to 22-year-olds to prepare them for their next level.”