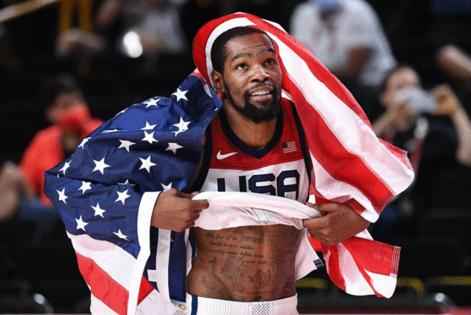 Green was talking about Kevin Durant, who spared the U.S. its most humiliating defeat in any sport at these Olympics on Saturday by scoring 29 points in an 87-82 victory over France in the gold medal game.

Durant is the best to ever do this, better than Bill Russell or Michael Jordan or LeBron James.

He's the greatest Olympic men's basketball player of all time.

He's won three gold medals, matching Carmelo Anthony for the most ever. With 420 points in 22 games, he's the U.S.'s all-time leading scorer at the Olympics.

There's also his performance at these Games.

SAITAMA, Japan — The U.S. men’s basketball team capped a tumultuous month of training, of chaos, of losing and ultimately, of victory on Saturday, winning gold by beating France, 87-82.

Jrue Holiday has had a few good weeks.

Draymond Green sat down still buzzing from the champagne and the Americans' fourth straight gold medal when he held out...Read More

TOKYO — The artistry, if that's what we're calling it now, starts before the swimmers jump into the water.

Arms swing freely or move in rigid unison as part of the poolside walk, some swimmers pivoting on their heels ...Read More

With more and more American athletes choosing to kneel or raise a fist on the medals podium, joining a nationwide movement for social justice, the U.S. Olympic & Paralympic...Read More

He could not have been happier.

TOKYO — Allyson Felix became the all-time leading medal winner in U.S. track and field history on Saturday when she ran the second leg of the gold-medal-winning 1,600-meter relay at Olympic Stadium.

In her final race, ...Read More