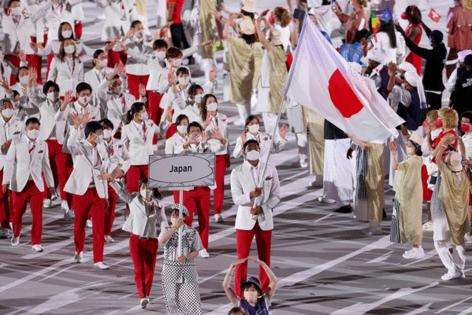 TOKYO — With millions around the world watching, Rui Hachimura walked onto the gleaming white floor of Japan’s Olympic Stadium on Friday waving the country’s red-and-white flag.

The 6-foot-8 Washington Wizards forward with a Japanese mother and Beninese father led his nation’s athletes in procession, a beaming smile peeking out of the sides of his face mask. Towering 20 inches over his fellow flag bearer, wrestler Yui Susaki, the 23-year-old’s careful steps signaled a changing face of Japan.

But in an unpopular Games, echoing with protests outside the largely empty Tokyo stadium, the discontent and ire over the influx of foreign visitors in the midst of a pandemic threatened to overshadow the inclusive image Japan had intended with Hachimura.

Even apart from the COVID-19 pandemic, the years and months leading up to the Games have been marked a series of disappointments over promises to highlight diversity. The planet’s biggest sporting event has been troubled by high-profile resignations following scandals involving sexist and discriminatory remarks. The Olympic moment will come and go with neither a highly anticipated new anti-discrimination law nor immigration policies that reflect Japan’s fast-changing needs and norms.

It has left a conflicted feeling for Japanese like Hachimura or tennis great Naomi Osaka, who lighted the Olympic torch capping Friday’s ceremony, who haven’t always felt accepted. Some Japanese cling to notions of ethnic and cultural homogeneity even as the country needs young people to replace the world’s fastest-aging population. Although cities like Tokyo have become more cosmopolitan over the last half century, only 2% of babies born in Japan having at least one foreign parent.

Athletes like Hachimura are “one of the few people that can bring major changes for us,” said Alonzo Omotegawa, who has a Japanese mother and Bahamian father and has lived in the Tokyo area his entire life. Yet he has been repeatedly told: “You are not Japanese.”

The 25-year-old English teacher said he questions whether Hachimura’s popularity and symbolism will be enough to stifle the discrimination he faces on a daily basis — change the minds of landlords who refuse to rent to him because of his skin color, children who ask if it will wash off or police who stop and search him without warrant, saying people with dreadlocks like him “tend to carry drugs.”

“The country is only on our side when it wants to be,” he said.

Organizers devoted a chapter of Friday night’s opening ceremony to a performance featuring children of diverse ethnic backgrounds assembling the Tokyo 2020 emblem. For months, the slogan “Unity in Diversity” had been pasted on posters around the city, projecting at least for the international media that this nation of 126 million was pledging to become more nuanced and accepting.

At the same time, the pandemic, as it has elsewhere, has brought out in Japan suspicion of those who look different, and a fear they may bring danger. That unease has been amplified in recent days as tens of thousands of athletes and others from around the globe have filtered into a nation that had kept its borders heavily restricted, even keeping out many foreign expats who’d long called Japan home.