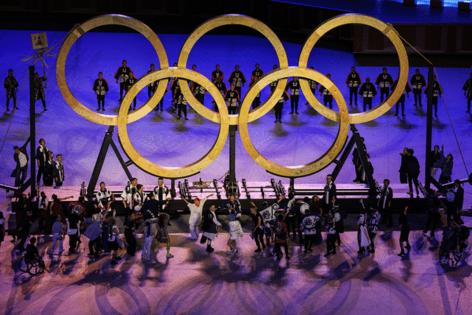 TOKYO — The Tokyo Olympics fired the director of the opening ceremony a day before it took place because he joked decades ago about the Holocaust.

After watching the ceremony at Olympic Stadium on Friday night in Japan, I would suggest that the organizers rehire him so they can fire him again.

It's going to be a weird few weeks, folks.

It was a weird night at the Olympic Stadium,a night that frequently asked the musical question, "Do we have to stay for this?''

The Tokyo Games have already experienced a series of serious problems, even before you consider that they were postponed a year because of the pandemic and earlier this week one of the Games' executives suggested that the Olympics could be canceled if COVID-19 cases continue to rise.

French investigators already were probing alleged bribes paid to International Olympic Committee members to persuade them to vote for Tokyo, a scandal that led to the resignation of the Japanese Olympic Committee head, Tsunekazu Takeda.

Friday night the athletes walked across the field, waving at empty stands, and often exited quickly, the field remaining sparsely populated, instead of filling and staying full as is the case at most Olympics.

By the time the cauldron was lit and fireworks filled the sky over Tokyo, most of the athletes had left or were leaving.

The choreography and "entertainment'' portions of the ceremonies were odd, the atmosphere flat, deserving of the sound of one hand not clapping. Much of the music was derived from popular video games invented in Japan, but the first song heard on the PA system before the ceremony was "I've Got You Under My Skin" — now known as the perfect pandemic anthem.

Yes, the Olympic flame made an appearance, lighting a bland-looking cauldron. But is there an Olympic spark?