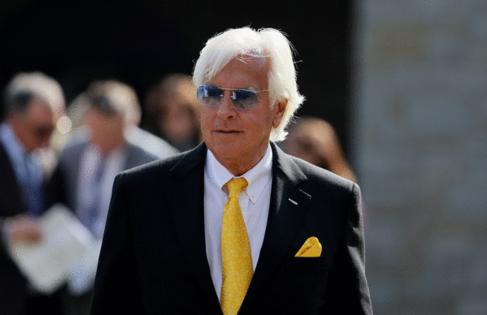 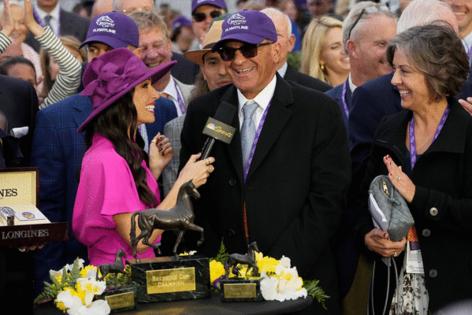 — Flightline: Wow. That’s all that can be said after that performance. One of the best horses in the world attempted to run Flightline off his feet in the opening stages of the Breeders’ Cup Classic on Saturday. He didn’t come close. Life Is Good led in the early going, Flightline chasing every inch of the way, and those two entered the stretch on relatively even terms after putting down a series of fast fractions. It was an incredible show to that point. What happened next was extraordinary. Flightline simply ran away from Life Is Good and toward a permanent spot in horse racing’s history books. As Life Is Good faded in midstretch — a valiant effort, but not nearly enough — Flightline simply kept going. And going. And going. He seemingly had plenty left in the tank, if he needed it. He didn’t. Jockey Flavien Prat turned around as soon as he passed the sixteenth pole. There was nobody there. Prat geared Flightline down, and soon after the duo crossed the finish line for the sixth time together. Six victories. All runaways. “Brilliant is his normal,” trainer John Sadler said. “He didn’t disappoint. He never has.” The Keeneland crowd was buzzing for the entire run and popped loudly at the end. Those in attendance were left to contemplate what they’d just seen as Flightline galloped out, turned around and made his way back toward the grandstand. When he reappeared, that crowd went wild again. Prat heard the cheers, stood up a little in the saddle and pointed down emphatically at one of the most magnificent Thoroughbreds anyone has seen in a long, long while. “This is one of the great horses of all time,” Sadler said. “I think history will show that.”

— Malathaat: The most thrilling finish of the weekend was won by one of this Breeders’ Cup’s greatest competitors. Malathaat came into the Distaff with nine victories, two second-place finishes and a third-place showing in 12 career starts. Her only third was in last year’s Distaff. Her only two seconds were behind Clairiere, who she met again Saturday afternoon. She also entered Saturday overshadowed by her stablemate, Nest, the 9-5 favorite and top 3-year-old filly. This Distaff was a different story, with Malathaat winning a three-horse photo finish that wowed the Keeneland crowd, giving her four wins in four career starts at the track. Blue Stripe was second, Clairiere was third and Nest was fourth. After the race, Shadwell Farm’s Gregory Clarke didn’t shut the door on a return to racing for the 4-year-old star. “Wouldn’t it be lovely if she stays in training?” Indeed it would.

— Ireland: The country was responsible for six winners across the weekend’s 14 races. Irish-born trainer Aidan O’Brien trained three of those Irish-bred winners, and Charlie Appleby trained the other three. Six of the seven Breeders’ Cup races on the turf were won by Irish-breds. The only outlier was the Turf Sprint, which was won by Pennsylvania-bred Caravel, a 42-1 shot trained by Louisville native Brad Cox.

— Bob Baffert: The embattled trainer had five entries in this weekend’s Breeders’ Cup races. He left Lexington with zero Breeders’ Cup victories. His best shot was the odds-on Juvenile favorite Cave Rock, who was caught by Forte in the stretch for the first loss of his young career. Baffert’s well-regarded National Treasure finished third in that race. His Speed Boat Beach finished ninth in the Juvenile Turf Sprint as the second betting choice. Baffert ended up having just one runner Saturday — following the morning scratch of Laurel River in the Dirt Mile — and that was Taiba, who finished third behind Flightline and Olympiad in the Classic.

He did unveil a new star Saturday, sending the regally bred Arabian Knight — a $2.3 million purchase — to an impressive debut victory in the first race on the undercard. Arabian Knight was ridden by John Velazquez and is owned by Amr Zedan, the same connections as Medina Spirit, who crossed the Kentucky Derby finish line first last year, then was DQ’d due to a positive drug test, which resulted in Baffert being banned from the 2022 and 2023 Derbys.

Arabian Knight’s performance will put him on the early Derby radar, but Baffert won’t be able to train him there, and the son of Uncle Mo won’t be able to accrue Derby qualifying points as long as he’s in Baffert’s barn (unless his continued legal appeals pay off). Oh, and to add insult to Baffert’s only bright spot of the weekend: he was booed by some in the Keeneland crowd after Arabian Knight’s victory.

Hope for the best

LEXINGTON, Ky. — The Breeders’ Cup returns to Keeneland this weekend, with the World Championships of horse racing coming back to Lexington for the third time.

LEXINGTON, Ky. — From the first time John Sadler laid eyes on Flightline, he saw the potential for something truly special.

“I drove out to Lane’s End and looked at him and saw what a great looking horse he was,” ...Read More