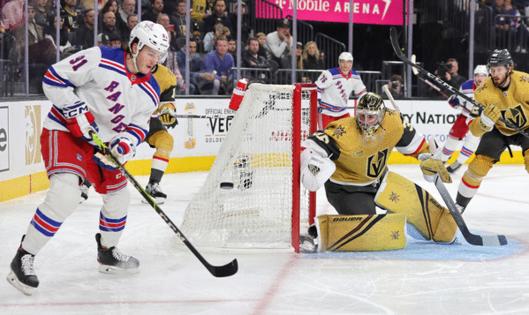 The two pieces of broken stick stayed below the goal line as goaltender Logan Thompson skated to the Golden Knights’ bench.

His frustration had boiled over with 8:26 to play Wednesday night at T-Mobile Arena. It was hard to blame him. Even if his poor stick had to pay the price by getting smashed over his goal post.

After entering the third period tied 1-1 with the New York Rangers, the Knights allowed four goals in a 5:35 span to lose 5-1 in front of an announced crowd of 17,939. The loss was their third straight at home.

The Knights were short-handed and facing a hungry team fighting to get back in the playoff picture. They also let the game get completely away from them.

The Knights (19-8-1) started slowly. They were outshot 15-5 in the first period and trailed 1-0 after a tip from right wing Kaapo Kakko.

A five-on-three power-play goal from right wing Jonathan Marchessault — his third goal in three games — tied the score with 6:22 left in the second period. The Knights, back home after a four-game trip, had an opportunity to get their crowd fired up and take control.

They couldn’t do it.

Center Mike Zibanejad fired a one-timer from the left circle to put the Rangers (13-10-5) ahead 2-1 with a power-play goal 5:59 into the third period. Center Filip Chytil scored 24 seconds later while Zibanejad’s goal was still being announced.

Left wing Alexis Lafreniere made it three goals in 1:53 by scoring 7:51 into the third. Another power-play one-timer by Zibanejad, this time off a faceoff, put the Rangers up 5-1 with 8:26 to go and shattered Thompson’s stick.

The Knights were playing without center Jack Eichel (lower-body injury) and defenseman Alex Pietrangelo, whom the team said will be away indefinitely because of an illness in his family.