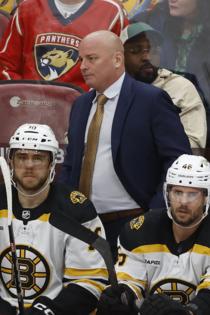 BOSTON — The defending Stanley Cup champion Colorado Avalanche may not be whole right now with a number of key injuries, but the Bruins can only beat the opponent in front of them. And as usual, they did just that.

The Bruins got two goals from David Pastrnak, two from Trent Frederic and another strong performance by Linus Ullmark to beat the Avs, 5-1, improving to 14-0 at at TD Garden this year, extending their winning streak on Causeway Street to 21 straight dating back to last season. They are now 20-3 on the season.

Hard to find much fault with that.

The high-powered Avalanche came into the Garden down a little bit of voltage as they’re missing Gabriel Landeskog and Valeri Nichushkin up front and Josh Manson on the back end, to name just a few missing players. But the Avs still have plenty of giddy-up that the Bruins had to match in the first period..

The Bruins took a 2-0 lead in a rollicking, entertaining opening 20 minutes. Brad Marchand, who had been struggling to reach his game after surgery despite piling up points on a regular basis, looked like his old self. He drew two penalties in the first and set up the Bruins first goal of the game at 13:49.

On the Bruins' second power play, Marchand sent a perfect seam pass from the bottom of the right circle to left circle, from where David Pastrnak blasted his one-timer, beating Pavel Francouz for his 15th goal of the season.

The Bruins had been throwing their weight around in the first period and, when Andreas Englund hit Nick Foligno into the boards with a questionable though unpenalized hit, the Bruins veteran didn’t like it. He dropped the gloves with the big defenseman and the two traded haymakers before Foligno scored the take-down.

As much as the crowd loved it, Foligno was tagged with an extra two for roughing and the Bruins had to face the top power plays in the league. They not only killed it off, they created a couple of shorthanded chance.

When the Bruins got back to full strength, they built on the momentum and extended the lead on a beautiful play at 18:51. After some intense pressure, the Avs tried to clear the puck but Pavel Zacha gloved it down in the high slot and pushed it to an onrushing Charlie McAvoy. From the right point, McAvoy sliced through the slot and sent a pretty backhand pass to Trent Frederic, who rammed home his fourth of the year.

Meanwhile, Linus Ullmark, playing his first game since suffering an upper body injury, needed to be sharp and he was, stopping all 14 shots that came his way in the first, including two in tight from Nathan MacKinnon in succession.

The Bruins had what looked like a Jake DeBrusk goal called back after he followed up his own shot and somehow worked the puck over the goal line, but after a review it was ruled that the net had come off the moorings before the puck crossed the line.

But they didn’t have to wait long to push it to 3-0. David Krejci sprung Pastrnak for a clean breakaway and the sniper made a pretty move to his forehand, roofing it over Francouz at 4:48.

The Bruins had a chance to to make it 4-0 when Tomas Nosek was granted a penalty shot with 2:51 left in the period. On the freebie, the Nosek threw the leg kick at Francouz but the goalie didn’t bite, turning away Nosek’s forehand chance.

Though they’ve had intermittent issues with second periods, they were in full command, outshooting the Avs ,15-4, in the second.

The Bruins had a couple of chances to put the game away early in the third with a couple of power plays, but could not cash in and the Avs got on the board with a gift goal at 6:32. With the Bruins seemingly in control of the puck, McAvoy and Matt Grzelcyk collided and left a loose puck for Andrew Cogliano in the slot. Cogliano beat Ullmark shortside and it was a two-goal game.

But the Bruins nailed it down with a couple of late goals 10 seconds apart from Frederic and DeBrusk, the winger’s 100th career goal.