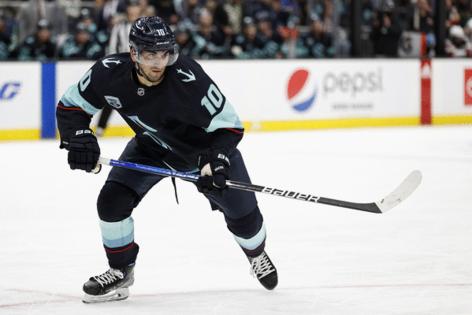 SEATTLE — There was a clear Kraken focus throughout this homestand opener of avoiding the barrage of goals and quality chances against they’d yielded their previous road contest.

And that much was accomplished throughout a 3-2 overtime win over the improving Washington Capitals at Climate Pledge Arena, a tight-checking affair in which the home side mostly marked opposing forwards and got in front of potentially dangerous chances. But the reason their franchise record streak was extended to seven straight wins Thursday night had plenty to do with the Kraken patiently waiting to sustain some offensive pressure of their own and get in close to the net.

Matty Beniers won a faceoff in overtime and then sped in on a breakaway, beating Darcy Kuemper for the clinching goal just seven seconds into the extra 3-on-3 frame. It was the Kraken’s fourth consecutive overtime victory in two weeks after dropping their initial three.

Yanni Gourde scored a tying goal for the Kraken with just 2:27 remaining in regulation time, fighting off a check and chipping home a rebound. Daniel Sprong did the initial work, digging the puck out behind the net, moving out front and putting an initial shot on net.

It was a fitting reward for a Kraken team that came on stronger as the game neared its end, having been stymied from getting in deep on Capitals’ netminder Kuemper throughout.

One of the first Kraken players to do so was Jaden Schwartz, whose power play goal with just 6:32 remaining in the middle period got his team on the board after they’d already fallen behind by two for the first time in a month. An initial point blast by Vince Dunn sailed wide, but rocketed off the end boards right out to Schwartz — who buried it top shelf behind Kuemper.

It was only the 10th shot on goal all game by the Kraken to that point, though they’d held the Capitals to an equal amount in keeping things close. Washington registered just four shots total in the opening frame but managed to put two of them past goalie Philipp Grubauer to put the visitors up 2-0.

Alex Ovechkin drew assists on the two Washington markers, but the NHL’s third all-time scorer was kept from any goals with seven still needed to reach the 800 milestone along with Wayne Gretzky and Gordie Howe.

The defensively tight Kraken hadn’t allowed a Washington shot for nearly five minutes after the opening faceoff, trying to avoid a repeat of Tuesday night’s debacle in Los Angeles when they needed nine goals to pull out a 9-8 overtime win. They also had Grubauer making his first home start in six weeks in his second game back off a lower body injury.

He’d still faced just the lone shot before Martin Fehervary was allowed to walk into a blistering drive from atop the left faceoff circle that beat Grubauer short side with 7:36 gone in the frame.

Still, the Kraken continued to play tight defensively and didn’t allow another Washington shot for nearly seven more minutes. But then, a Jordan Eberle tripping call led to a Caps’ man advantage against a Kraken squad that entered with the NHL’s second-worst penalty kill at 64.5% and it didn’t take long for the visitors to pounce.

There wasn’t much Grubauer could do on the play, but the bottom line was the Kraken trailing by a pair despite having allowed just three shots. It was the first time they’d been down multiple goals since a Nov. 1 comeback win in Calgary and the first time at home since Oct. 27 in a loss to Vancouver.

The closest the Kraken got to delivering any blows of their own that period came via the fists of Yanni Gourde, who landed a slim majority of punches in a fairly even fight with Stanwood native T.J. Oshie, making his Climate Pledge debut after missing last year’s game here because of an injury.

Things opened up somewhat in the second period, but there were few quality chances for either team. Washington enjoyed the bulk of them, with Grubauer coming up big a handful of times and looking sharper as the game wore on.

Finally, a tripping penalty to Evgeny Kuznetsov allowed the Kraken to get some offense going and it took just 16 seconds for them to capitalize on Schwartz’s goal. From there, the Kraken increasingly found ways to get in close, with Eberle hitting the post on Kuemper in the final two minutes of the period and then Beniers fanning on the rebound with the net wide open in front of him.

Grubauer did his part to give his team a chance, sliding across his crease to stop a one-timed chance for Kuznetsov.