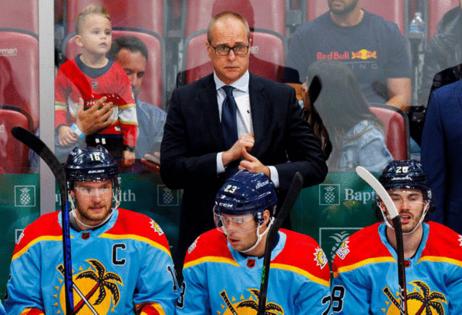 More than a quarter of the 2022-23 NHL season is done and if it ended today, the Florida Panthers would not be in the 2023 Stanley Cup playoffs.

It’s too early for Paul Maurice and the Panthers to panic — and the coach knew this season was never going to be as smooth as last, when they won the Presidents’ Trophy — and yet Florida is starting to come to a pivotal moment.

The Panthers’ last homestand didn’t go as smoothly as they hoped — they won only 2 of 6 and blew a three-goal lead to the St. Louis Blues on Saturday — and now they’re on the road for five in a row, starting with a game against the Edmonton Oilers on Monday.

“This is going to be a tough trip for us, so we need to make sure we’re mentally ready for it, ready to play for it,” Maurice said Sunday, “but I think we are.”

It won’t be so easy, though. Star center Aleksander Barkov isn’t with the team to start the trip, still battling an illness which had already kept him out for two games in the last two weeks.

The hope is the star center will rejoin the team after in the week — “the moment he feels ready,” Maurice said, “we’ll get him on the trip — but Florida can’t afford to keep losing for too much longer.

The Panthers (10-8-3) entered Monday sitting two points outside playoff position, albeit with one fewer game played than the eighth-place Pittsburgh Penguins, and with an unimpressive plus-2 goal differential. As much as Florida believes it has played better than its record, the Panthers just aren’t consistent enough right now to actually consider themselves one of the best teams in the league.

“Eventually here, we’re going to be looking to get on a run,” left wing Ryan Lomberg said Friday.

Right now, the odds are actually stacked against Florida. Since the NHL implemented the salary cap back in 2005, roughly 76 percent of teams in postseason position at Thanksgiving go on to make the Stanley Cup playoffs and the Panthers, on Thursday, weren’t one of those teams.

They also missed out on a chance to capitalize on a potential turning-point victory.

After knocking off the league-leading Boston Bruins on Thursday in Sunrise, Florida came back Friday and had to play shorthanded because of Barkov’s illness and a lack of cap space to field a replacement, and blew a three-goal lead to the Blues at FLA Live Arena.

The Panthers will finally get a reinforcement to replace Barkov this week — center Aleksi Heponiemi is with the team as the league-allowed emergency replacement — but just missing Barkov is a big blow. Now, Florida is set to play Nick Cousins as its first-line center after the forward began the season on the fourth line.

It’s a potentially precarious spot for the Panthers to be in, even with almost three quarters of the season left to play.

“We are not where we want to be in the standings,” Barkov admitted Thursday. “We have not won as many games as we would like to.”

At the same time, some of Florida’s struggles are by design. In his final press conference before training camp in September, Maurice said part of the reason he feels he’s right for the job is a veteran coach would be better equipped to deal with the scrutiny accompanying the growing pains of a wholesale system change.

The Panthers very much knew they were going to take their lumps in the first few months of the year, trusting struggles now would ultimately pay off in the Cup playoffs because they were almost certain they’d make them.

Whether it was the right decision is up for debate. Eventually, though, they have start winning some games to put any doubt to rest.