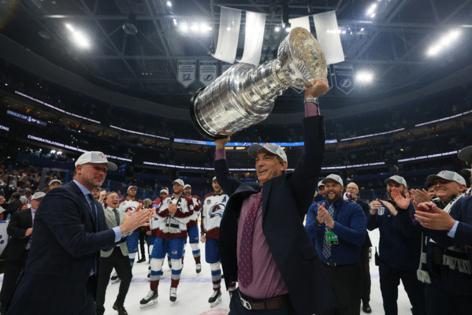 TAMPA, Fla. — One by one, as if it was choreographed weeks ago, all 28 players and each member of the coaching, training and equipment staffs and front office took their turn with the Stanley Cup here late Sunday night.

Gabe Landeskog, per tradition for the winning captain, posed for the photo.

Coach Jared Bednar was the first non-player to get the Cup.

“It takes a moment or two to sink in, even when you’re on the ice,” Bednar said. “I’m so proud of the guys and what they put into this season. It will become a little more real as we spend the next couple days together.”

Over the next couple days the Avs will share so many stories, about the worst-to-first journey, about the 102 regular season/playoff games this season. So many stories and memories, personalities and relationships.

As the Avs celebrated with friends and family on the ice deep into the night, much of the talk turned toward MacKinnon, Bednar and Joe Sakic. The superstar. The coach. And the general manager.

Last June, following the playoff collapse against Vegas, MacKinnon accurately said he hadn’t won “(bleep)” during his time with the Avalanche.