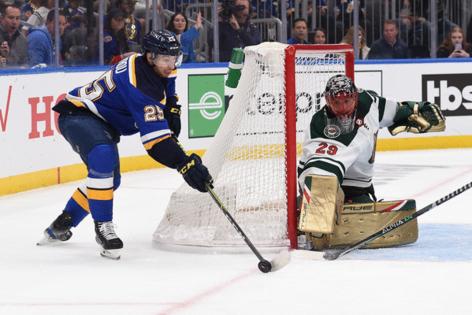 Cam Talbot was benched during the best run of his NHL career, assigned to being the Wild's backup when the team started the playoffs before making a last-ditch, pinch-hit effort in a season-ending loss to the Blues.

But the goaltender wants to remain with the Wild and with another year left on his contract, he expects to stick around.

"Unless they have something else planned," Talbot said, "I plan on being back here in September."

Once a position with clarity, how the Wild handles its goaltending is now one of the questions that will headline the team's off-season, which included players speaking Monday during a news conference at Xcel Energy Center.

The arrival of Marc-Andre Fleury at the trade deadline scrambled the equation. It meant subtracting Kaapo Kahkonen after Kahkonen worked with Talbot for a season and a half before getting sent to the Sharks. A three-time Stanley Cup champion and reigning Vezina Trophy winner as the league's top goalie, Fleury rotated starts with Talbot until near the end of the regular season when Fleury began to see more action ahead of him ultimately getting the nod vs. St. Louis.

Talbot, meanwhile, finished on a 13-0-3 tear, setting a franchise record for longest point streak by a goalie and tying for the most wins in the NHL during that span.

"The coaches had a decision to make, and I don't think there was a wrong decision," said Talbot, who was still disappointed he didn't play more in the postseason. "Obviously, you trade for a guy like that with his pedigree and his past, why wouldn't you start him Game 1? Obviously, I wanted to play but I understood their decision and where they were coming from."

On multiple occasions, Wild coach Dean Evason referred to choosing a goaltender as "easy," a comment Talbot and Evason have discussed.

"What he told me and what I believe is that it would have an easy decision either way," said Talbot, who went 32-12-4 in the regular season with a 2.76 goals-against average, .911 save percentage and three shutouts. "It was just worded or put out there in the wrong manner. Obviously, there's no ill will on my end and definitely not on his end either."

Facing elimination, the Wild finally called upon the 34-year-old Talbot after he'd been idle for two weeks and he was in net for the team's 5-1 collapse in Game 6 last Thursday that knocked it out of the playoffs.

"It was fine," Fleury said of the switch. "We've done it since I've been here, and I've been a part of this too with other teams. Cam's had an awesome season. He was very good all season, and I wasn't surprised when they told me Cam was going."

Fleury is glad he had an opportunity to suit up for the Wild, with the team bringing him in from the rebuilding Blackhawks on March 21 for a second-round draft pick. The 37-year-old is on an expiring contract and mentioned winning and his family as factors he'll weigh in free agency as he "probably" evaluates a year at a time now. He also said he'll consider re-signing with the Wild.

"For sure," said Fleury, who went 9-2 with the Wild before the playoffs with a 2.74 goals-against average and .910 save percentage. "It was such a great time, loved the time and made it very appealing to play here."

As for Talbot, he's on the brink of the final season of a three-year, $11 million contract.

Jesper Wallstedt, whom the team drafted 20th overall last year, is coming off a 11-9-2 performance in Sweden's Elite League in which he ranked first in goals-against average (1.98) to go along with a .918 save percentage and three shutouts in 22 games. The Wild announced a three-year, entry-level deal for the 19-year-old on Monday, but General Manager Bill Guerin mentioned not rushing anybody to the NHL when the future goaltending outlook became uncertain at the trade deadline.

Guerin kept Talbot informed of the team's pursuit of Fleury and eventual acquisition, and Talbot figures that dialogue will continue as the Wild works to solidify the position for next season.

"That's respect going both ways, and I would assume to have that same line of communication all summer," Talbot said. "I can't see why it wouldn't be."