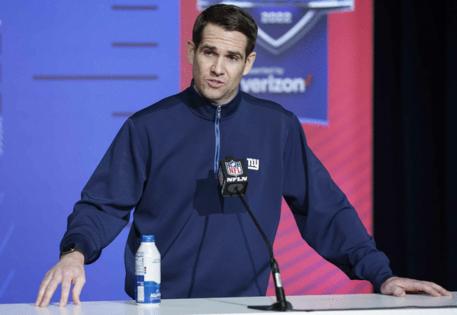 Ownership could be tempted to accelerate their expectations for this rebuild after making the playoffs in Year 1.

A sudden influx of salary cap space could bait Schoen into overpaying in free agency for immediate upgrades to satisfy that end.

But Schoen used all the right phrases Monday about assessing “market value” of free agents, valuing “known commodities” in house, weighing “positional value” in contract negotiations, and narrowing the Giants’ “margin for error” when upgrading the roster.

“The foundation is set,” Schoen said at his end of year press conference. “We’re still trying to build this thing so we can sustain it.”

In the fall, Schoen’s discipline resulted in acquiring third- and sixth-round picks for malcontent wide receiver Kadarius Toney. On Monday, it led to playing hardball on Saquon Barkley’s possible contract extension and future with the team.

“We weren’t really that close,” the GM said of their initial November negotiations.

Schoen is determined to continue making “progress,” a barometer he said the Giants satisfied in his first season. That will mean spending a good chunk of his estimated $54.2 million in cap space, as estimated by OvertheCap.com.

But the GM’s Monday message reflected an executive refreshingly rooted in process, with guardrails in place to continue guiding the franchise on a path to sustainability.

BOSTON — In Bill We Trust.

The other Bill — Belichick — is still teetering on the edge of being trusted given some of his curious decision-making in recent years.

At least he got the right guy ...Read More

LEXINGTON, Ky. — The sports adage says that it’s hard for any good team to beat another good team three straight times. So what about four? That’s the question for Sunday’s AFC Championship Game in Kansas City, Mo....Read More