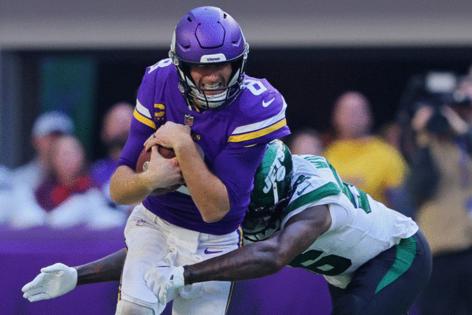 The Vikings took a 20-6 lead into halftime on Sunday at U.S. Bank Stadium, and with the second-half kickoff coming their way, they seemed in position to pull away from the Jets and get their first comfortable victory since Week 1 against the Packers.

They ended the day doing everything they could to contain a frantic Jets rally in a 27-22 win, holding New York to 10 points on four fourth-quarter drives that all reached the red zone. The Jets posted 221 yards in the fourth, and 336 total in the second half, as the game morphed into another one the Vikings would have to pull back from the brink.

The fulcrum on Sunday, as it has been so often this season, was the third quarter.

The Vikings ran 12 plays in the third quarter that netted a total of 10 yards. Kirk Cousins overthrew an open T.J. Hockenson, and an uncharacteristic Justin Jefferson drop cost the Vikings a chance for a big gain two plays later. The offense went three-and-out to start the second half; the Vikings' final two drives of the quarter ended with Jets sacks. The Vikings finished the quarter with -14 net passing yards; Cousins' only completion went to Dalvin Cook for no gain.

"The one to T.J. was the most egregious miss," Cousins said. "That was just a miss. Gave it too much. There were a couple [where] my feet were ahead of the play, so I'm hitching and my feet are telling me to release it, but the play hasn't really developed yet."

The quarterback added that he needed to watch the plays again to "make sure that I'm slowing down my drop, if that makes sense, to make sure I'm not ahead of the read or ahead of the play."

In the third quarter, though, their 4.47 yards per play are the second fewest in the NFL. Cousins hasn't thrown a third-quarter touchdown; he has three third-quarter interceptions this season, and his passer rating is only 58.2.

The Vikings have scored only 34 points in the third quarter this season (their opponents have scored 86). Only the Broncos, Chargers and Steelers have scored fewer.

"I was hoping to get off to a little bit better start there in the third quarter, and then whether it was our second drive there, I did think we had a couple opportunities pass wise," coach Kevin O'Connell said Sunday. "We just couldn't convert those plays."