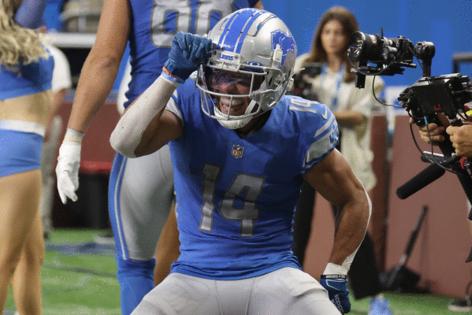 ALLEN PARK, Mich. — The Detroit Lions have racked up 1,227 yards of offense through three games. On Sunday, they're going to be without two players responsible for nearly half that production, ruling out wide receiver Amon-Ra St. Brown and running back D'Andre Swift on Friday.

St. Brown suffered an ankle injury in last Sunday's game against Minnesota. Despite finishing the contest after getting it taped up, he's been unable to practice this week, putting him on track to miss the first game of his young career.

St. Brown finished with six catches for 73 yards, snapping an NFL record streak of eight games with at least eight receptions. For the season, he's hauled in 23 passes for 253 yards and three touchdowns, while carrying the ball two times for another 68 yards.

As for Swift, he had already been playing through a sprained ankle when he suffered a shoulder injury against the Vikings. Combined, those two issues are expected to sideline him the next two games, leading into the Lions' bye week.

This will mark the third consecutive season Swift will miss time with an injury, sitting seven games the previous two years of his career. The Lions had made keeping him healthy a point of emphasis this offseason, while simultaneously challenging him to play through the more minor physical ailments.

To his credit, Swift had been responding to that latest challenge.

"The one thing I will say about that kid, it was us as coaches that pulled him out (against Minnesota)," running backs coach Duce Staley said. "He wanted to go. He wanted to keep going. And if we didn't pull him out, he'd still be going today. That tells me about the energy, the commitment, just the fire the kid has to continue to play."

Swift has been responsible for 231 of Detroit's 511 rushing yards, including a pair of 50-yard gains. Additionally, he's added another 77 yards and a touchdown as a receiving threat out of the backfield.

Without Swift, the Lions will lean on a backfield rotation headed by Jamaal Williams, who is coming off a 20-carry, 87-yard, two-touchdown performance against the Vikings. He'll be supplemented by Craig Reynolds and Justin Jackson.

With Detroit's receiving corps, the team will look to Quintez Cephus and Kalif Raymond to step up and fill the void created by St. Brown's absence. Starters Josh Reynolds and DJ Chark are also dealing with ankle issues, but they are on track to play this weekend against Seattle.

MINNEAPOLIS — Warning: This column contains all kinds of biases, including personal, recency, positional and geographical. If I can find a few more along the way, I will toss them in like extra potatoes in a stew.

CHICAGO — Don’t worry, Cole Kmet said, Trevor Siemian will not take it as an insult if you say he is unlikely to keep the ball on a zone read and motor 60 yards through the New York Jets defense Sunday at MetLife ...Read More

TAMPA, Fla. — Bucs running back Rachaad White will make his second NFL start Sunday at Cleveland. He’s earned it, but this time it’s also by default.

Leonard Fournette on Saturday was downgraded from doubtful to out...Read More

SEATTLE — I wrote last week that success can prompt regret, using the Washington Huskies football team as Exhibit A. Despite having an improbable nine wins thus far — including one on the road against then-No. 6 Oregon...Read More