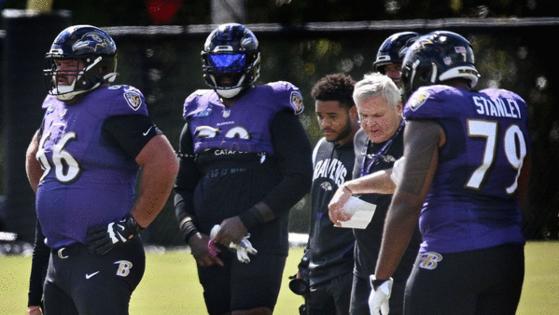 Right now, the unit is a revolving door, even though it seemed to find some rhythm in Sunday’s 37-26 win over the New England Patriots. The Buffalo Bills will be a much bigger challenge because they have the No. 2 ranked run defense in the NFL led by Von Miller, Gregory Rousseau, Boogie Basham and Jordan Phillips.

The Ravens will counter with guards Ben Powers and Kevin Zeitler, rookie center Tyler Linderbaum and right tackle Morgan Moses, but left tackle remains a mystery. It could be Patrick Mekari, rookie Daniel Faalele or possibly the All Pro himself, Ronnie Stanley, who has played only one game in the last two seasons because of an ankle injury. Stanley dressed in shorts and shoulder pads Wednesday, but Faalele took the repetitions with the first team.

The constant shuffling is one of the major reasons the Ravens are ranked No. 15 in rushing offense, way below their top-five standard of previous seasons. Offensive line play is about chemistry and being in sync, and the Ravens haven’t had any consistency at left tackle, the most important position on the line.

“We’re striving for it,” coach John Harbaugh said. “It’s a position we want to be in, for sure. There is value in having backup guys, a backup plan, with guys who can play different positions because things happen. Ideally, you want to have one group out there just like on defense, just like in the secondary, where you have a group out there as much as you can.”

Starting left tackle Ja’Wuan James tore his Achilles tendon in Week 1 and is out for the season. Mekari sprained his ankle against New England and did not practice Wednesday. Faalele replaced Mekari against the Patriots and played reasonably well after a slow start, but he’ll struggle against the Bills’ defensive line.

This situation was somewhat predictable. James was struggling to make it through training camp after missing the entire 2020 and 2021 seasons and Mekari has been bothered by a bad back for years. It was only a matter of time before they missed extensive playing time due to injuries.

The Ravens need Stanley to play. He has had nearly two years to heal, and Harbaugh basically said a week ago that Stanley had to decide on his own when he could return.

The time is now.

“It’s what he sees, it’s what he feels, those two things have to be taken into account,” Harbaugh said. “Ronnie doesn’t want to go out there and we don’t him to go out there if he doesn’t feel he is ready to go. It’s a priority for him to be at his best when he comes back. At some point, he is going to have to jump in there. It could be this week.”