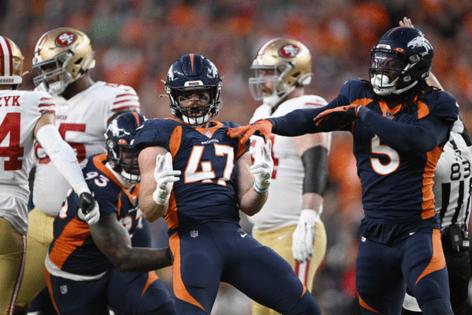 DENVER — Jimmy Garoppolo perilously dropped back to pass, then egregiously step out of the back of the end zone for a safety. Stunningly, that still wasn’t the worst thing to happen on that pivotal play for the 49ers in Sunday night’s 11-10 loss with the Broncos.

All-Pro left tackle Trent Williams exited with a right-ankle injury, and that was a much scarier sight for the 49ers than seeing their lead shaved to 7-5 midway through the third quarter.

Whatever would ensue over the game’s remainder, it will be hard to forget about Garoppolo’s gaffe and especially Williams’ injury, the latest injury blow to a 49ers team that lost running back Elijah Mitchell to a sprained knee in the opener and quarterback Trey Lance to a season-ending fractured ankle in last Sunday’s win.

One more Garoppolo blunder finished off the defeat: his daring pass to Deebo Samuel got deflected by safety Kareem Jackson and intercepted by ex-49ers linebacker Jonas Griffith near midfield with 2:06 remaining. That left time for one more turnover: Jeff Wilson Jr. fumbled a completion with 1:05 left.

This obviously was not the ideal re-introduction for Garoppolo and the 49ers (1-2) to a national audience in their prime-time debut this season. Next up: they host the defending Super Bowl champion Los Angeles Rams (2-1) next Monday night.

They’ll likely have to rebound with a new blindside protector for Garoppolo, who endured sacks from the left tackles who replaced Williams, the first being Jaylon Moore and then Colton McKivitz.

Williams, a nine-time Pro Bowler, had his right leg hit by ex-49ers D.J. Jones, who was blocked into Williams by center Jake Brendel, all while Garoppolo was stepping on the end line.

Thus, this essentially was up to the 49ers defense, one that opened the season strong against Chicago and Seattle, whose offenses gained the NFL’s fewest yards through two games.

Could they protect a 7-3 halftime lead — then 7-5 lead — against Russell Wilson, their arch enemy the past decade when went 17-4 against them with Seattle Seahawks?