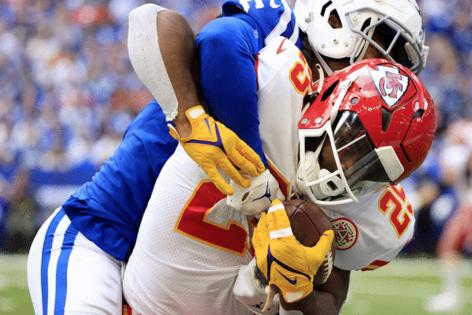 INDIANAPOLIS — Ten days before this debacle against the previously winless Colts on Sunday at Lucas Oil Stadium, the Chiefs scavenged out a 27-24 win over the Chargers that came with some contradictory implications.

The meaning of that game was in the eye of the beholder, really.

In one sense, it was a testament to grit and resourcefully whisking a win out of defeat. In another, it was laden with potential fool’s gold if the Chiefs mistook a dangling misfire by Justin Herbert turned into a game-changing 99-yard interception return as some kind of armor.

Safe to say there was no gray area to be interpreted in the Chiefs’ wretched 20-17 loss to Indianapolis.

This was an entirely rightful and well-earned defeat, because slapstick special teams play and an off-kilter offensive performance offset a largely terrific defensive game.

And because of finding a way to win, this time they did just the opposite by generating a stupefying number of critical turns in the game — including the late one by Chris Jones that was the most memorable and absurd.

Absurd because his crucial unsportsmanlike-conduct penalty gave the Colts new life instead of facing a fourth-and-14 at their own 31 with the Chiefs leading 17-14 and just under 5 minutes left.

And absurd because we are entirely left to wonder what words provoked a game-changing flag that officials later said was called because of “abusive language” directed at Colts quarterback Matt Ryan.

Asked if he could elaborate during a postgame media pool interview conducted by ESPN’s Adam Teicher on behalf of the Pro Football Writers of America, referee Shawn Smith said, “No, but it will be in our game report” to the NFL.

So unless and until that becomes public, we are left to speculate on what that means … and to what degree we might consider it appropriate. And left to wonder what was entailed in Ryan’s part of an exchange that Jones referred to as “a conversation.”