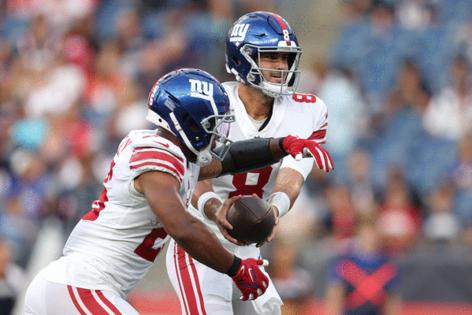 “I know … a thing that’s been said about me is he don’t know what he’s doing, he’s just dancing back there,” Barkley said. “I’m really kind of fed up with people who never played the position and try to speak on how I run the football. We call them All-Pros with clickers in their hand.”

Barkley, 25, was responding to a question about whether he’s been making a conscious effort to run more north-south.

Head coach Brian Daboll had said after the Giants’ preseason opener that Barkley “hit the ball downhill [and] didn’t dance” against the Patriots. The direction of Barkley’s first step has been a common criticism of his game through four seasons.

But Barkley clearly had bottled up frustrations on that critique, possibly dating back to this scathing quote from an unnamed “veteran NFL offensive coach” in a July ESPN story:

“I’m down on him — he still doesn’t know how to play running back enough,” the coach said. “He’s a bouncer. He wants every run to be a home run. He’s going to have to learn that 4-yard runs in this league are good, instead of stopping, cutting it back and losing 2. And he gets his ass kicked in protection.”

Barkley had a message for anyone who shares those opinions Thursday.

“This is probably the last time I’m gonna speak on this,” he said. “I know people are gonna say dancing and this, that and the third, and ‘he don’t get north and south.’ I’m not just gonna run into my lineman’s back. That’s not how I play the game. It’s not how I’ve been playing since I was 8 years old. I’ve been playing this position for a very long time.”

Barkley did admit that Daboll and the new coaching staff “have been making a point of a running style and mentality that we have as a team.” But he said Daboll is “talking about the physicality of me trusting myself, me getting downhill.”

Later, he specified for the New York Daily News that Daboll and offensive coordinator Mike Kafka have articulated expectations for him. They want him to take the handoff, hit the ball downhill, trust the play call to get Barkley to space, and then “Go be Saquon.”

But he said when Daboll praises him for getting downhill, the coach is saying he’s pleased with Barkley showing trust in his body. That’s compared to the past, when Barkley admits he might have hesitated or instinctively tried to protect a knee or ankle on his runs.

“When people try to make it north and south — not coach in particular — but people are trying to use that as an example of I’m back there like I’m dancing,” he said. “Dancing is stuff you do in high school football and little league football where you run this way and you run that way. That’s not my thought process.

“If I’m making a run back in the day and someone breaks free and someone’s in my face, I’m not just gonna run right at him and try to get back to the line of scrimmage,” he added. “That’s part of my craft. That’s part of my game. But like I said with coach, that’s kind of the emphasis, meaning like alright we want to get more physical, we want to get more downhill, but not saying, ‘Oh you’re not hitting north and south.’ Know what I’m saying?”

Barkley, interestingly enough, didn’t do much during full-team 11 on 11 for a second straight practice on Thursday. And that’s straddling a Wednesday off-day. It’s possible he sits Sunday’s second preseason game against the Cincinnati Bengals, though that’s not yet clear.

He said he’s healthy but the team is “watching the workload” of its players. Not to mention he had something else on his mind Thursday: his doubters.