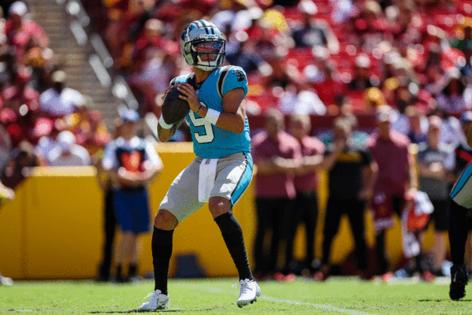 If you’re looking for some reasons for hope — and really, what football fan isn’t at this time of year? — the Carolina Panthers provided several in their first preseason game Saturday.

The score wasn’t important. But Mayfield reminded everyone in this game that his arm can be a rocket launcher, and that is important.

Mayfield’s 40-yard deep-ball effort to Robbie Anderson, even though it was incomplete, was well-thrown and the kind of play that will make defensive coordinators put an extra safety deep. That in turn should give Christian McCaffrey (who didn’t play, and surely won’t all preseason) some extra room when it counts.

So that’s a good sign as the Panthers get ready to spend most of a week in the New England area, where they will have two joint practices against the Patriots on Tuesday and Wednesday and then play them in an exhibition in Massachusetts on Friday night.

The Panthers’ offensive line still is getting sorted out, but the protection seemed better. The first-team defense also looked like it knew what it was doing. The special-teams effort was improved, and placekicker Zane Gonzalez went 3-for-3 on field goals, including the 45-yard game-winner with 24 seconds left.

And in the continuing quarterback battle, it was Sam Darnold who threw the game’s only touchdown pass, taking advantage of a short field and floating an 8-yard pass beautifully to Rashard Higgins on a crossing route that ended up at the back left pylon.

Darnold played two series to Mayfield’s one, and on the second one the Panthers went 3-and-out and punted. He and Mayfield both had some good moments. PJ Walker was actually the Panthers’ leading passer, playing more than anyone else and throwing for 136 yards.

And Carolina rookie QB Matt Corral showed some spunk, only going 1-for-9 for 11 yards but somehow leading the Panthers to a game-winning field goal anyway in the final minutes without a single pass completion. It helped that Corral drew a 15-yard facemask penalty the hard way, getting his helmet ripped off in the middle of a play and continuing to scramble until the play was blown dead.

Head coach Matt Rhule was cagey after the game about whether Mayfield would start again in the second preseason game Friday, and Mayfield himself opined that it had just been “my turn to start.” But it’s becoming more apparent to close observers that Mayfield is going to start that opening-day game Sept. 11 against his old team, the Cleveland Browns, and Darnold is going to be the backup.