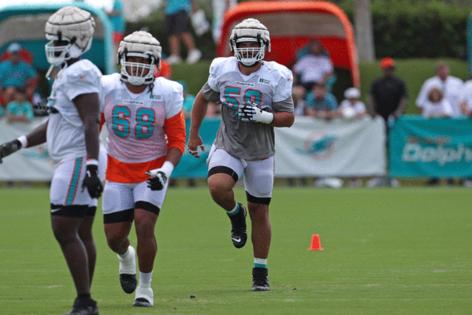 TAMPA, Fla. — Think of Connor Williams as a young, talented baseball pitcher who is having location issues.

Sometimes the fastball’s a little high. Sometimes the curve can’t hit the corner, and every once in a while there’s a dribbler get gets past the catcher.

The former Dallas Cowboys offensive guard the Miami Dolphins signed to a two-year, $14 million deal this offseason with the vision of having the 25-year-old switch positions to center, hasn’t been horrible in his new spot.

He’s not spraying the ball all over the field in his fifth month of snapping the ball. But the quarterback-to-center exchange has been far from perfect in the first three weeks of training camp.

Thursday’s practice provided a solid sample size of Williams’ current location issues. Tua Tagovailoa had to jump for a couple of the 11-on-11 snaps during Thursday’s joint practice against the Tampa Bay Buccaneers, and then there was one snap that was so low all Tagovailoa could do was fall on the football and eat the play for a would-be sack.

If Miami were playing a game, snaps like those could kill drives, which is why these occasional off-the-mark snaps have become one of the team’s bigger concerns heading into the preseason games.

“That’s kind of harsh,” Williams responded when I told him that his snapping wasn’t ideal from a targeting standpoint so far in camp. “Obviously it’s just perfecting your craft. It’s day in and day out, just trying to hit the [strike zone].

“We get reps whenever we can, however we can. It’s just being able to get it in the box every time,” Williams continued. “Even in those stressed-out situations where you know you’ve got to move wide really quick — right at the snap of the ball — being able to snap it and then get out, and being able to perfect that.”

That’s the thing about this wide zone run scheme that new coach Mike McDaniel and his staff are installing. The center isn’t just window-dressing for this offensive line. Whoever plays that position is an active participant when it comes to creating running lanes, and helping tailbacks get to the second level.

That’s why the Dolphins opted to move Williams there instead of investing another season into Michael Deiter as the starting center, or addressing the position in free agency by signing a veteran, or selecting one with a draft pick.