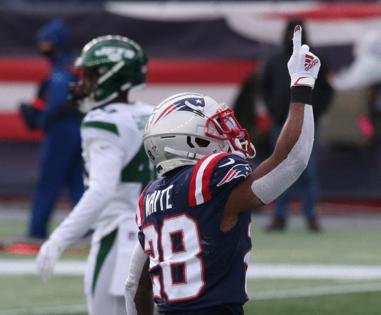 BOSTON — Patriots running back James White announced his retirement from football Thursday with a statement on social media.

White, 30, retires after suffering a hip subluxation last September that required surgery and kept him bedridden for more than a month during recovery. He re-signed on a 2-year deal last spring, and started training camp on the Physically Unable to Perform list, but never progressed to full practice participation.

White played his entire eight-year career with the Patriots, rushing for 1,278 yards and 11 touchdowns while catching 381 passes for 3,278 yards and 25 touchdown in regular-season games. He won three Super Bowls and was named to the franchise’s 2010s All-Decade team.

White’s most memorable performance helped catapult the Patriots to the greatest comeback in Super Bowl history, a 34-28 triumph over the Falcons in Super Bowl LI, where he caught 14 passes for 110 yards and a touchdown and rushed for two more, including the game-winner in overtime. He set three Super Bowl records that night: most receptions (14), most points scored (20) and most touchdowns (3).

The statement began: “It has been an honor to represent my family, my teammates, and the people of New England as a Patriot! Reflecting on my nine years in the NFL, and all the sacrifices it took to get here, there are many people that were just as much part of this journey. Thank you to my wife and kids for sacrificing my time with them to allow me to play football. My wife, Diana, especially.”

He later added: “To say that Foxboro will always hold a special place in my heart is an understatement.”

In his own statement, Belichick said White “defines the term consummate professional.” White joined the Patriots as a fourth-round pick out of Wisconsin in 2014. After appearing in just three games as a rookie, he emerged as the team’s primary third-down back and set the NFL standard for pass-catching and pass protection among running backs.

Despite missing most of last season, White owns the most receptions (364), receiving yards (3,161) and receiving touchdowns (25) by a running back in the NFL since 2015.

“His dependability, consistency, unselfishness and performance under pressure are elite. Combining great intelligence, quickness and elusiveness, James was a perfect fit for our pass offense,” Belichick wrote. “While soft spoken, he brought exceptional leadership and competitive toughness to the team. He was a multi-year team captain and one of the most respected, best team players I have ever coached.”

White’s retirement ends his four-year streak of being elected a team captain. He was well-regarded across the locker room and a mentor to young players, including starting running back Damien Harris. In 2020, Harris said: “I can’t even put into words how much you can learn from a guy like James White. … I really look up to him a lot. And he knows that. I tell him every day every chance I get.”

White’s work ethic and determination were also noticed in the owner’s box. In a statement released Thursday, Kraft wrote he looks forward to celebrating White’s accomplishments for years to come; a possible nod to the running back’s airtight case for one day making the Patriots Hall of Fame.

“He is a man of great character and integrity and earned everyone’s respect through his work ethic, professionalism and positive daily demeanor,” Kraft said. “James became a part of the Patriots’ family while in New England, and while his presence in our locker room will be missed, we are happy for James and his family as they embark on a new adventure.”

At a charity event last month, White provided a sneak peek at his future.

“I’ll probably get into coaching or broadcasting, maybe even do radio,” he told a group of children. “Maybe I’ll open my own shoe store. I love shoes.”

Denver not only lost a divisional game Sunday afternoon to Las Vegas, it lost one of its best offensive players for the season as well.

Running back Javonte Williams tore the ACL in his right knee and he will miss the ...Read More