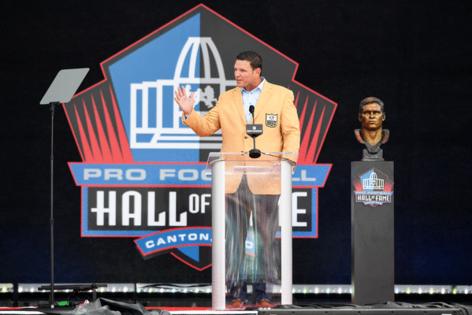 ORLANDO, Fla. — Tony Boselli had his bronze bust unveiled in Canton, Ohio, over the weekend, but this should not be the final chapter of his Jacksonville Jaguars legacy.

It should be the beginning of a new phase of his affiliation with the team that he once road-graded a path to becoming the most successful expansion franchise in NFL history.

I will die on this hill — journalistically speaking, of course.

It’s baffling that a brilliant billionaire businessman such as Khan could make so many bad football hires over the years (see coaches Urban Meyer, Gus Bradley, Mike Mularkey, GM Gene Smith and the decision to make old-school, no-nonsense former coach Tom Coughlin into the vice president of football operations), but has somehow managed to overlook the obvious, no-brainer hiring of Boselli as the franchise’s front man.

Why wouldn’t you want the greatest Jaguar of all-time and one of few shining stars in the organization’s otherwise dismal history to be the leader? Boselli’s induction into the Hall of Fame actually gave beleaguered Jaguars fans a reason to feel good and be proud of their team for a change.

You could tell just by watching the induction ceremony on TV and seeing the massive number of Jaguars fans who made the pilgrimage to Canton and bought up every last shred of Boselli Hall of Fame gear that was on sale. The Boselli apparel and souvenirs sold out so quickly that Tony’s own family didn’t even get a chance to buy any.

“Definitely, the Jaguars were the most visible team presence this year,” HOF spokesman Rich Desrosiers told the Florida Times-Union.

Of course, you would never hire someone to run your franchise just because they are beloved, but popularity certainly doesn’t hurt Boselli’s credentials. Especially when public confidence in the organization is at an all-time low as the Jaguars try to make their way out of the muck and mud of the Urban mire.