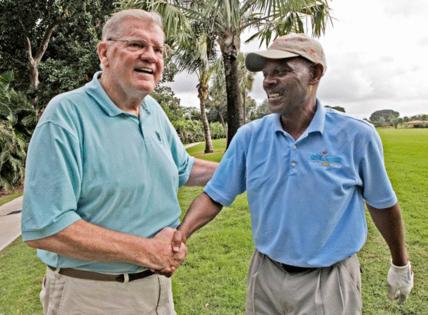 The Dolphins were told that heart failure was the cause of death.

His daughter, Angela Marriott, told The Associated Press that Briscoe had been battling pneumonia after being hospitalized with circulation issues in his legs.

Drafted as a cornerback in the 14th round by the Broncos in 1968 – as the 357th overall pick - out of Nebraska-Omaha, Briscoe replaced injured quarterback Steve Tensi as a rookie, became the AFL’s first Black quarterback and established a Denver rookie record with 14 touchdown passes. He was nicknamed the Magician.

Denver wouldn’t allow him to compete for the quarterback job in 1969, so he asked for and was granted his release.

Briscoe then became a Pro Bowl receiver for the Buffalo Bills, who traded him to the Dolphins for a first-round draft pick that was used on Joe Delamielleure, who became a Hall of Fame guard.

Briscoe played three of his nine professional seasons for the Dolphins, catching 57 passes for 858 yards (a 15.1 average) and eight touchdowns in 28 games for Miami, including 20 starts.

He appeared in 10 games and started three for the Dolphins’ undefeated 1972 team, finishing with 16 catches for 279 yards (a 17.4 average) and a team-leading four touchdowns.

He later played for San Diego, Detroit and New England and then retired after playing the 1976 season. He later became a successful financial broker in retirement while overcoming a 10-year cocaine addiction that at one point left him homeless.