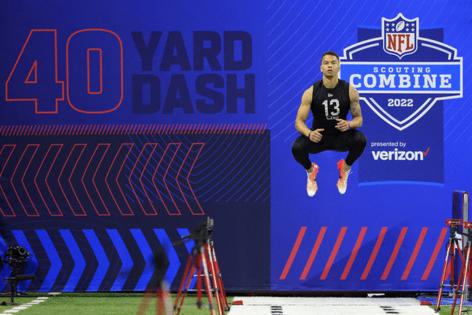 ATLANTA — We don’t know what will become of Desmond Ridder’s career. After all, the list of third-round picks turned franchise quarterbacks is brief. But if he isn’t the Falcons’ answer, it won’t be because he doesn’t “get it.”

Third-round quarterbacks aren’t expected to be the solution. Otherwise, they would go the first day. For every Russell Wilson, there are a bunch of Brodie Croyles and Mason Rudolphs. In fact, unearthing a Mike Glennon or Josh McCown can be considered a success. Two former Falcons backups, Matt Schaub and Chris Redman, were third-round choices. There’s nothing wrong with that level of career. Very, very few players hang around the NFL for a decade.

Ridder is aspiring to be an exception. He wants his name next to Wilson, not Rudolph or Glennon. This is a player who won 44 games in his college career. “Yeah, at Cincinnati.” Would you feel better if he were losing games on a worse team at Missouri?

The NFL cast doubt on Ridder when he fell out of the first round. This quarterback class was lamented for months, and the draft echoed that sentiment when only one, Kenny Pickett, went in the first round (No. 20). The Falcons then took Ridder at No. 74.

“At the end of the day, I was the second quarterback taken off the board,” Ridder said. “Obviously wanted to be the first one but kind of saw how this draft went. Saw that everyone was slipping, a lot of wide receivers taken, whatever it may have been. I’m just blessed to have this opportunity to be out here, play this game I love in a beautiful city, a beautiful place, beautiful facility. So, yes, I am going to take it and use it as (a) chip. But, no, it’s not something I’ll think about every single day.”

Ridder shouldn’t need any extra motivation. Striving to become the face of an entire operation should be enough to get him out of bed each morning. Apparently, it is. And he’s not quiet about it.

“I told Desmond, don’t be so loud in the morning,” said tight end John FitzPatrick, a Georgia Bulldog-turned-Falcon who was one of Ridder’s roommates at rookie minicamp last weekend. “He’s like jumping around the room. He said he’d work on it. … He just wakes up early, and he’s just loud. It’s like a bull in a china shop, I don’t know how to describe it.”

Shortly after FitzPatrick spoke, Ridder talked with reporters for the first time since rookie minicamp opened. There were a few highlights, but the overarching takeaway was his maturity. Ridder wasn’t a top recruit. He didn’t attend Alabama or LSU. He wasn’t a first-round pick. He’s never taken a snap in the NFL. One wouldn’t know any of that listening to him.

Ridder has perfected towing that fine line of confidence vs. arrogance. He believes his leadership style already has resonated with teammates. He said he has the playbook “down pretty good,” which makes him a resource for teammates on offense, one means of developing relationships with one another. Ridder understands the magnitude of the quarterback’s responsibilities. He seems to have a big-picture view, knowing that he plays a role in others’ growth.

“As a quarterback, that’s kind of your role, naturally, it’s time to be that leader,” Ridder said. “So to do that naturally without making it forced or making it too hard on other guys, I think that’s what comes easy for me.”