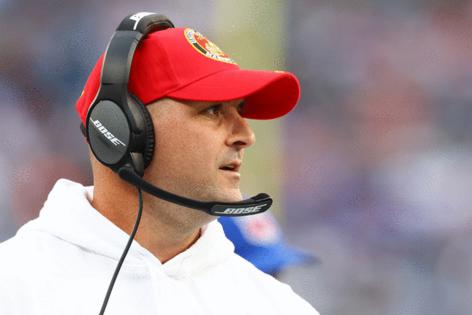 During a video conference with the media Monday, both Joe Judge and Matt Patricia acknowledged now having roles with the Patriots offense.

Judge, the former head coach of the New York Giants, and former special teams coach with the Patriots, confirmed reports he was working with the quarterbacks.

Patricia, meanwhile, who has primarily been a coach on the defensive side of the ball throughout his career, backed a report that he would be involved with the offensive line.

Unlike their defensive counterpart, Judge and Patricia were a bit more forthcoming, although questions remain.

Judge painted a picture of having a collaborate effort with all of the offensive coaches, in terms of dealing with the offense. He’d coach Mac Jones and the other quarterbacks, but also branch out.

“I am working with Mac, along with some other people; I work with all the skill group,” said Judge. “I’d say all of us are working collectively as a coaching unit to work with the entire offense…in terms of who is coaching each position, you’ll see me with the quarterbacks.”

Judge, who spent a season coaching the wide receivers (2019) during his previous stint with the Patriots, said it really didn’t matter to him what position group he coaches.

“I love coaching football. I don’t care what you ask me to coach,” said Judge. “I like coaching all positions. I really enjoy offensive football. Look, I’ve played and coached football as far back as I can remember. I’ve worked and coached on all three sides of the ball . . . coach (Belichick) plays does a really good job of developing everybody as a total coach.

“There were springs and falls where I’d sit in here with the offensive line, the quarterbacks, different position groups which has prepared me in a lot of different avenues in being a more complete coach.”

As for Patricia, he first thanked Bill Belichick and Patriots owner Robert Kraft from bringing him back as a “senior football advisor” after his dismissal in Detroit, where he had been the head coach for three years (2018-2020).

He then acknowledged adding the offensive line to his repertoire, a position he hasn’t coached since 2005 when he assisted then offensive line coach Dante Scarnecchia.

“I’ve been able to be out there with the offensive guys, working with the offensive line, and just kind of help those guys and work some technique, to just basic fundamental stuff, but nothing really heave on that,” Patricia said, adding: “It’s been great for me . . . it’s been fun to get back to that and get back to my roots of how I started coaching in this league.”

Asked if he would be consulting Scarnecchia, Patricia said he has the Patriots’ longtime offensive line guru on speed dial, because Scar was one of the best coaches he’s been around.

“If you have an opportunity to spend time with Dante,” said Patricia, “you automatically become a better coach.”

Patricia, however, doesn’t want to become too much of a pest to the legend.

“I don’t like to bother him,” Patricia said of Scarnecchia, “but there’s a lot of roots there and I appreciate him. It’s been fun.”

PITTSBURGH — The Steelers might not win many games in 2022, but it won't be because of a lack of confidence.

This was Cam Heyward on the Mina Kimes podcast last month when asked how he feels about being on the second ...Read More

The NFL may be kicking off its summer hiatus, with teams off until training camp begins in late July,

But that doesn’t mean the ever-churning NFL rumor mill has stopped.

And Wednesday afternoon brought another one ...Read More

When you splurge on three players, you better find some bargains for the rest of your defense.

I'm thinking the Steelers just found one in Larry Ogunjobi. I don't have access to the medicals, and I wouldn't know what to ...Read More