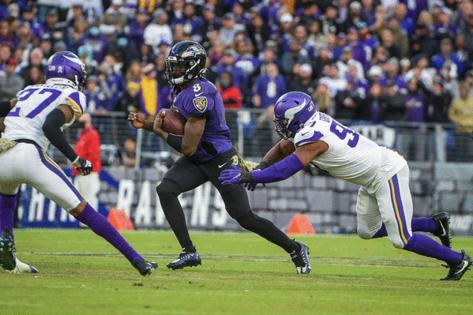 MINNEAPOLIS — In his first public comments since he was taken by ambulance for mental health treatment on Nov. 24, Vikings defensive end Everson Griffen announced on social media that he has been living with bipolar disorder.

"It's true I am bipolar," he wrote on Instagram. "I will embrace it and I will be an advocate for mental health. I been running from it a long time. I'm not ashamed of it anymore."

Griffen wrote his struggles with bipolar disorder started when his mother, Sabrina Scott, died unexpectedly while visiting him in the Twin Cities in October 2012.

"Went into a dark place, thought I was great for many years," he wrote. "I promise this time I will do everything the experts say. I love my family and I miss my friends. Thank you for all the love and support, but most of all thank you for all the prayers."

The 33-year-old is currently on the non-football illness list while he receives mental health treatment, after an impasse with police where he refused to come out of his home for several hours. Griffen called 911 shortly after 3 a.m. from his Minnetrista, Minn., home on Nov. 24, saying someone was with him and that he needed help from law enforcement. He also told the dispatcher that he fired one round but nobody was wounded, police said; they added no intruder was found.

The same day, Griffen had posted, then deleted, a video on Instagram saying people were trying to kill him as he held a gun in his hand.

He was alone inside the house, with police outside, until he emerged willingly and agreed to be taken for treatment. Vikings mental health professionals assisted for several hours.

Griffen also spent four weeks undergoing mental health treatment in 2018 after two incidents that September — one at the Hotel Ivy in downtown Minneapolis, the other at his home in Minnetrista — prompted police involvement. He later revealed he lived in a sober house for the remainder of the 2018 season. Griffen returned to play 17 of the Vikings' 18 regular-season and postseason games in 2019; he spent 2020 with Dallas and Detroit, and he has posted five sacks this season after the Vikings brought him back on a one-year deal in August.

It's hard to believe Sean McVay is ...Read More

BALTIMORE — Shortly after Kansas City had beaten the Buffalo Bills, 42-36, in overtime of an AFC divisional round playoff game Sunday, the complaints started to surface about the NFL playoff system and how it should be ...Read More

CHICAGO — Noah Pinzur had a piece of advice for Eric Bohn.

Enjoy your 15 minutes of fame. It goes by fast.

Bohn and Pinzur never have met and probably never will. They’re just a couple of Chicago sports fans who ...Read More

LOS ANGELES — Rams receiver Cooper Kupp this week was announced as the NFL offensive player of the year by the Pro Football Writers of America, and he is a candidate to collect a similar accolade when the annual NFL ...Read More

As new Vikings General Manager Kwesi Adofo-Mensah told it in his introductory news conference on Thursday, he logged off his first Zoom interview with the team on Jan. 17 convinced he'd met his match.

"I was catching up ...Read More

An NFL coaching hiring cycle that has been one of the most patient in recent memory finally began to percolate some on Thursday.

And as teams like the Broncos (Nathaniel Hackett) and Bears (Matt Eberflus) began to fill ...Read More