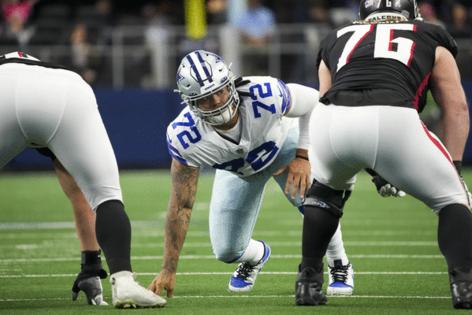 The Dallas Cowboys will be without defensive tackle Trysten Hill after the NFL suspended him two games for a postgame punch.

Hill, who will also be out two game checks, punched Raiders offensive lineman John Simpson after the Cowboys’ overtime loss on Thanksgiving.

Hill’s punch to Simpson’s face mask was strong enough to knock Simpson’s helmet off his head. It was a point the NFL noted in its press release.

“As both teams were shaking hands, you waited more than 50 seconds for your opponent at the 50-yard line,” the NFL wrote in its explanation letter to Hill. “When you located him, you then walked toward him in the opposite direction of your locker room. You both engaged in a verbal chest-to-chest confrontation which you escalated by throwing an open-hand punch to his facemask, forcible enough to cause your opponent’s helmet to come off.”

Hill, who was a second-round pick in 2019, played in the past three games after returning from an ACL injury from October 2020.

He’ll be available to return to the roster on Dec. 13.

The Cowboys (7-4) play at the New Orleans Saints on Thursday night and at the Washington Football Team on Dec. 12.