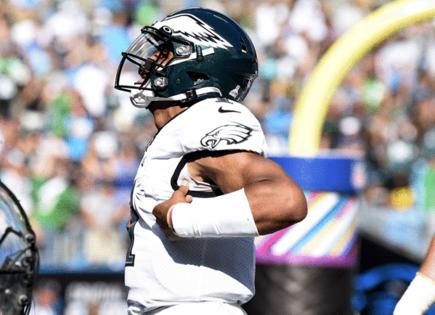 On DraftKings, it's important to remember you're playing full-point PPR with bonuses if a player surpasses 300 passing yards, 100 rushing yards or 100 receiving yards.

Here is my optimal lineup for Sunday's $3.5 million Fantasy Football Millionaire contest, but can be utilized as a foundation in other games and platforms.

All prices listed are courtesy of DraftKings with a $50,000 budget.

Hurts has produced 45 rushing attempts that resulted in a first down or touchdown this season. Only Jonathan Taylor and Derrick Henry have more. Oh, and he's been a top-12 fantasy quarterback in every game where he has played all four quarters — 13 times over the past two seasons.

Los Angeles' offense stunk up the joint in its last two games against the Titans and 49ers, so people have likely forgotten how good Henderson has actually been this season. I expect a bounce-back performance for the whole group after its bye week.