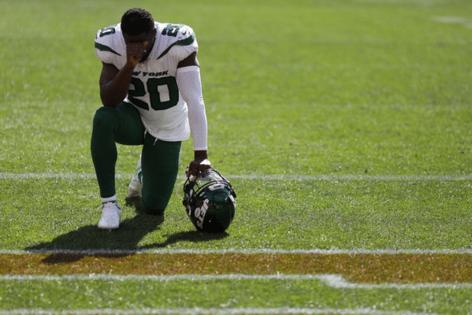 “Definitely feel sorry for it. I learned from it,” Maye said. “Just got to keep going.”

The incident occurred in February of 2021 and then Maye was charged with speeding and driving with a suspended license in April. The speeding charge was dismissed and the license charge was reduced to not “license not carried or exhibited” in August, according to Orange County (Fla.) court records.

The Jets reportedly didn’t know about either incident. Maye addressed the arrest with his teammates and talked to head coach Robert Saleh 1-on-1.

Maye declined to discuss the legalities of the situation with reporters on Thursday.

A lot has swirled regarding Maye in the past month.

First, the safety suffered an ankle injury against the Denver Broncos in Week 3. He ended up missing the next two games.

Then once his injury became public, his agent Erik Burkhardt, tweeted “Should be back fully healthy just before the trade deadline.”

That led to speculation that the Jets might trade him by the Nov. 2 trade deadline, especially after ESPN’s Jeremy Fowler reported that Maye would “welcome a move to a contender.”

But Maye denied that he wanted to be moved on Thursday and distanced himself from his agent’s tweet.