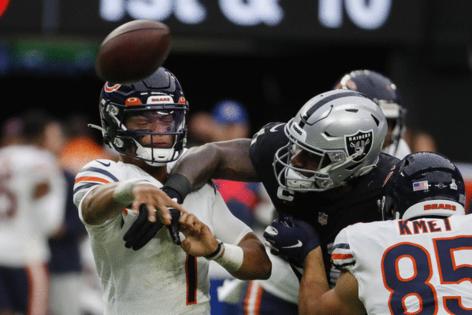 Here are three things we learned from Bears coach Matt Nagy and his players.

1. Justin Fields is excited to see Aaron Rodgers play against the Bears defense but isn’t measuring himself against the Packers quarterback.

Fields said he still is recovering from “discomfort all around,” including in his left knee, after taking some big hits Sunday against the Las Vegas Raiders. But he practiced in full Wednesday and said he should be good for his first Packers game.

Fields was 6 years old when the Packers drafted Rodgers in the first round in 2005, so he has been watching Rodgers play for a long time.

“I just like how he’s always in rhythm when he plays the game,” Fields said. “That’s a piece of his game that I try to emulate in mine.”

But Fields isn’t interested in seeing how he stacks up against Rodgers on Sunday in any category except the win column, saying, “My job isn’t to be better than any quarterback.”

Rodgers is on a different level than the quarterbacks Fields has played against in his past, but the rookie understands something about avoiding comparisons from his two College Football Playoff games at Ohio State against former Clemson quarterback Trevor Lawrence.

“To be honest, I don’t look at it as a matchup between me and Aaron, like I didn’t look at it as a matchup back then between me and Trevor,” Fields said. “I’m simply doing whatever I need to do to help my team win. If that’s hand the ball off 80 times during a game or throw for however many yards, that’s what I’m going to do. I’m not worried about comparisons between touchdowns, stats. I’m worried about winning. That’s it.”

Fields also is preparing for his first taste of the Bears-Packers rivalry, though he has an idea of the hype around such a game after playing in Ohio State-Michigan games.

LOS ANGELES — Several inflammatory emails by Jon Gruden were filed as exhibits in federal court by attorneys for Washington Football Team owner Daniel Snyder in mid-June, almost four months before they were leaked to two...Read More