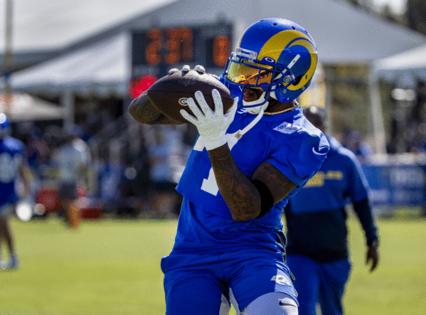 Those situations continued to evolve for coach Sean McVay on Thursday as his team prepared for Sunday’s game at SoFi Stadium.

With Darrell Henderson out for the second consecutive day because of a rib injury, Michel almost certainly will start for the Rams for the first time. Michel, acquired in a late-August trade with the New England Patriots, rushed for 46 yards in 10 carries during the decisive fourth quarter of a 27-24 victory over the Indianapolis Colts last Sunday.

“My job is to try and learn as fast as I can in a short amount of time,” Michel said after practice, “and if my number is called on Sunday, then I’ll be ready to go.”

Jackson said he would do the same.

The Rams signed Jackson to provide a deep threat for new quarterback Matthew Stafford, but through two games McVay has given the 14th-year pro only two opportunities to catch a pass.

“Still a little early,” Jackson said Thursday, “so just patiently waiting. Hopefully, this week is the week that I’ll be unleashed.”

Sunday’s game provides a grand stage for McVay to possibly work Jackson into a receiver rotation that includes Cooper Kupp, Robert Woods and Van Jefferson. The three combined for five touchdowns in victories over the Chicago Bears and the Colts.