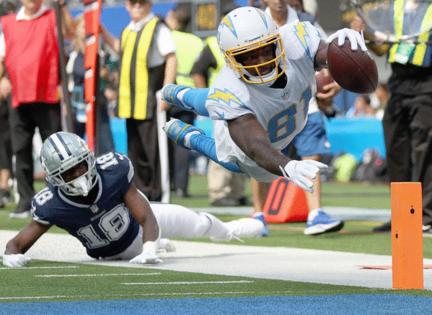 Entering Monday night, only four teams had gained more yards than the Chargers had through the first two weeks of the season.

And yet, they were 25th in points scored, an offense led by the giant right arm of Justin Herbert producing only three touchdowns.

“We’ve got a lot of guys on offense who have played a lot of football in the NFL,” coach Brandon Staley said. “But they haven’t played together.”

The Chargers are operating a new scheme under a new coaching staff and coming off a preseason in which many of their starters didn’t play for the sake of safety.

They’ve been excellent advancing the football but not so great as they get closer to the end zone. Seven of the Chargers’ 10 red-zone trips have failed to result in touchdowns. That 30% success rate ranks 30th out of 32 teams in the NFL.

“I think that’s coming together as an offense,” Staley explained, “and really understanding all the details of every play and the continuity that it takes, the chemistry that it takes to truly score the ball like we’re capable of.”

The issues on Sunday in a 20-17 loss to Dallas included the struggles of reserve right tackle Storm Norton, who was beaten several times, particularly by Micah Parsons, a linebacker playing defensive end.

The matchup always was going to be a difficult one for the Chargers. Norton was undrafted out of Toledo in 2017 and played in the XFL last year. Parsons was the third defender selected in April, taken No. 12 overall.

Staley called Norton’s performance “a little up and down.” In the Chargers’ season-opening victory at Washington, Norton played better and with more consistency.

“I know that he had a tough day,” Staley said. “But that’s not the reason why we lost that football game. He competed.”