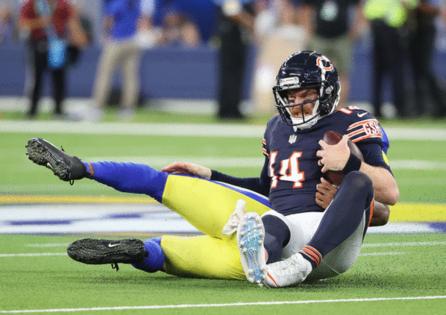 CHICAGO — The developmental plan for Justin Fields only will expand from Sunday’s five-snap outing against the Los Angeles Rams, and all Andy Dalton can do is support the coaches’ belief he’s currently the best option for the Chicago Bears by putting points on the board.

It all sounds ridiculous to the vocal crowd that wants to see Fields, the future at the position, start now. But the only people empowered to make the decision — the ones whose futures are staked to the performance of the team and development of the first-round draft pick — are rolling with Dalton for the time being. It’s probably a week-to-week proposition at this point.

Tune out the noise and sometimes read between the lines to understand what is going on. The Bears aren’t going into a lot of specifics about where Fields needs to improve in order for a depth-chart change. It’s likely they want to accentuate the positives — and there are plenty — while choosing to keep instructive points private. It will become unavoidable, of course, if the team gets further into the schedule and the offense is struggling, as it did the last two seasons.

The Bears drove into Rams territory on their first seven possessions, but that was only enough to keep the game within reach into the middle of the third quarter. A pass intended for Darnell Mooney on the opening drive was intercepted in the end zone, and two times in the first half the offense faltered on fourth down. That was the difference in a 34-14 loss.

The Bears won’t win many games — including Sunday’s home opener against the Cincinnati Bengals at Soldier Field — when they score only 14 points. The biggest problem was they couldn’t find advantageous situations against a Rams secondary that dominated with All-Pro cornerback Jalen Ramsey.

Dalton completed 27 of 38 passes and was quick with his decision-making but threw for only 206 yards (5.42 yards per attempt). That won’t cut it for an offense that was 27th in yards per attempt (5.95) last season and has ranked in the top half of the league only once since the selection of Mitch Trubisky in 2017, when the Bears were 14th in 2018 (6.96). They surely would accept a lower completion percentage in exchange for more explosive plays.

By any measurement, it’s not all on Dalton. The offensive line, which went from Jason Peters to Larry Borom to Elijah Wilkinson at left tackle in a span of only 48 snaps, was under duress.

Only three of Dalton’s 38 passes traveled 10 yards or more beyond the line of scrimmage, and that must change against the Bengals.

“One thing when we look back at the game, we were limited in that area,” Dalton said. “We weren’t able to take very many chances downfield. If you look back it’s something that we wish we could have done a little bit more. We understand that. We understand how we want to play. That’s where we’re at right now.”

The Bears ran the ball effectively with David Montgomery carrying 16 times for 108 yards and a touchdown — his first 100-yard game did not come until Week 11 last season — which should create opportunities for the play-action passing game against the Bengals along with designed bootlegs mirrored to the running game.