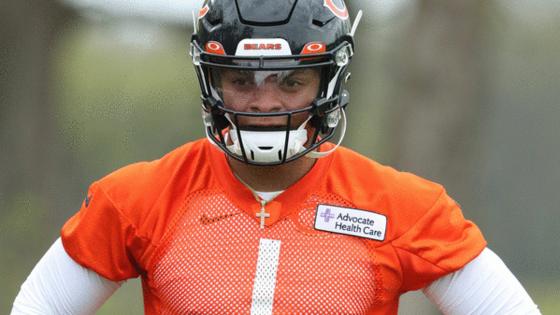 The organization’s ongoing efforts to solve the riddle at the game’s most important position now are pinned on Fields and the ability to unlock his potential.

But a dream scenario at the position in the NFC North isn’t going to develop. ESPN and NFL Network reported Monday that the Green Bay Packers are close to finalizing an agreement that will get Aaron Rodgers to training camp on time for what will be his 17th season with the franchise.

The Bears and the rest of the NFC North had to be hoping the icy relationship between the Packers and Rodgers would carry through training camp and into the season, something that potentially would have crippled the team. Now the NFL’s reigning MVP is almost certain to be back, which will make the Packers the prohibitive favorites in the division again.

Rodgers has dominated the division. He is 21-5 against the Bears, including the postseason, but the Bears have much more reason to be concerned with the development of Fields along with veteran Andy Dalton than they do the future of Rodgers, who reportedly will have the 2023 season in his contract voided.

For the Bears to be perennial contenders, they need Fields to eventually flourish, which is why every decision will be based on building around the young quarterback, similarly to how the team operated with Mitch Trubisky. General manager Ryan Pace has a do-over at the quarterback position, coach Matt Nagy has a passer he played a role in selecting and Rodgers is 37 and potentially preparing for his final season in Green Bay, although the agreement will keep him under contract through 2022.

Sure, watching the Packers try to pivot to Jordan Love, their first-round pick in 2020 who spent the entire season at No. 3 on the depth chart, would have been enjoyable for the Bears, Detroit Lions and Minnesota Vikings. But the Bears need to worry more about their own quarterback situation and finally getting it right than counting the days until Rodgers retires or plays elsewhere. Years ago, the Bears longed for the days the Packers would be without Brett Favre. Since Favre arrived in Green Bay, the Bears have invested eight first-round picks in quarterbacks via the draft or trades — two each on Jay Cutler and Justin Fields and one apiece on Rick Mirer (trade), Cade McNown, Rex Grossman and Trubisky.

It still was a tremendous offseason for the Bears — there was no guarantee they would be able to snag a highly touted quarterback in the draft while sitting at No. 20 in the first round. Multiple teams passed on Fields, the Lions and Denver Broncos among others, and maybe that will be a decision those organizations come to regret.

If that’s the case, the Bears will have their offense rolling with Fields, their franchise quarterback to start single week and will be in position to turn the tables on the Packers, who have won the NFC North seven times in the last 10 seasons.

The Bears’ season is all about the development of Fields, and it was going to be that way if Rodgers was playing in Green Bay or not. Veterans report to Halas Hall for the beginning of training camp Tuesday, and Fields will be on the practice field for the first time Wednesday.

Maybe Rodgers will force his way out of Green Bay for the 2022 season, and if that’s the case, the Bears will have reason to celebrate. They’ll be much happier if they’re doing so after a season in which Fields has shown considerable progress as a rookie.