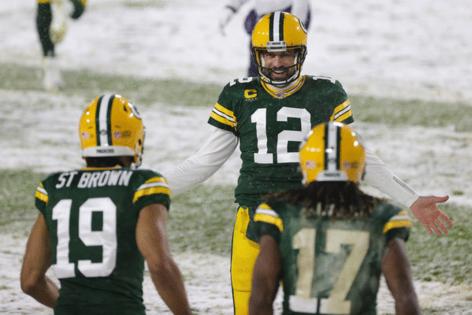 That chipping noise across the NFL is star quarterbacks tearing down the wall of feudal power. Aaron Rodgers demands out of Green Bay.

Deshaun Watson tells Houston he’s played his last down there (before falling into a quagmire of legal problems from sexual assault allegations). Chip.

This has NBA-style ramifications for the NFL as each of these franchise quarterbacks moves onto the open market. Why throw a dart at the board hoping on a young quarterback? Why not making your team instantly relevant since The Untouchables are now The Unhappiest?

Tom Brady showed the way for quarterbacks. Add this to the legacy of his mantel of the greatest player of all time. He didn’t just set up his exit from New England. His absence showed them for what they were — an average team without him — while turning perennial loser Tampa Bay into a winner.

Unhappy quarterbacks aren’t unusual. Terry Bradshaw criticized Rodgers for being so “sensitive” in Green Bay. But Bradshaw didn’t return to Pittsburgh until three decades after his retirement because he was so put off by how Pittsburgh treated him.

Dan Marino, tired of four straight non-playoff seasons and perhaps coach Don Shula’s ways, brokered the idea of a mutually beneficial trade from the Dolphins after the 1989 season. In a world without Twitter, it still caused a seismic outcry. “How dare he,” was the common theme. Players were treated as feudal property at the time.

“With him or with anyone else, if a trade would help the club, I would give it serious consideration,’' Shula said then. “But I’d never trade him and hurt the team.”

Marino’s request went nowhere. It turned out fine for him from the view of decades later. He’s now a quiet adviser inside his one and only team. But would he have won a ring if traded to a veteran Philadelphia team as rumored? Would that itch have been scratched?

The looming question as first posed by Brady is if quarterbacks should have a voice inside the team’s decisions. Answer: It depends on the quarterback. Dolphins GM Chris Grier nearly chuckled at a question about whether Tua Tagovaila stating the offense needed speed played into the team’s decision to get faster at receiver this offseason. Tua played one marginal year. There’s no weight to his voice just yet.

Dozens of former Michigan football players and other students who say they were sexually assaulted by Dr. Robert Anderson will hold a news conference outside Michigan Stadium on Wednesday morning to demand action from the ...Read More

PITTSBURGH — Where is Tom Brady when Le'Veon Bell really needs him?

The Vikings defensive line continued to be reshaped as free agent defensive tackle Sheldon Richardson reached a deal to return to Minnesota.

Richardson, 30, was released by the Browns in April to save salary cap space ...Read More

SEATTLE — When the Seahawks hit the field for mandatory minicamp Tuesday afternoon, safety Jamal Adams was not there, a source confirmed to The Seattle Times.

But a source said the absence is for personal reasons and ...Read More

President Mark Murphy should stop taking public digs at the “complicated fella” playing quarterback for his franchise — as Murphy did last Thursday at an event at ...Read More

Throw an “uncle” or an “auntie” in the front of someone’s name and it is a sign of respect, an homage to wisdom and experience, especially when they’re actually not a relative.