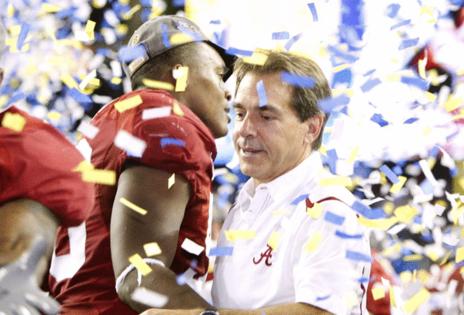 MIAMI — Alabama head coach Nick Saban has won seven national championships and restored the Crimson Tide into an annual national powerhouse program upon his arrival in 2007.

It came after a two-season stint in the NFL as the Miami Dolphins head coach.

But had the franchise signed future Hall of Fame quarterback Drew Brees, who was injured at the time, as a free agent in 2006, Saban's return to college might not have happened.

Back in 2015, Saban discussed that with ESPN's "Outside the Lines," saying, "If we had had Drew Brees, I might still be in Miami," according to the Baton Rouge Advocate.

On Thursday, Saban brought up Brees again when talking about former Alabama linebacker Dylan Moses, who went undrafted in this year's NFL draft.

"Don't forget, when I was the coach at the Miami Dolphins, doctors failed Drew Brees on a physical," Saban said to reporters at a Team Focus fundraiser in Mobile, according to AL.com. "And from that time on, he made about 14 Pro Bowls, won a Super Bowl and passed for, I don't know how many thousands of yards. So, I guess they make mistakes, too."

"In my time in the league, when guys were injured, and they came back and played, that usually got out of that 5 medical grade, which is undraftable [grade]," Saban said. "Might have been a 4 medical grade, which means the guy does have an injury that could be a problem in the future, but he's come back and played with it, so we ought to give him an opportunity — which I think Dylan Moses should have fallen for sure and should have gotten an opportunity cause he played all season long for us. And I think that should be a good enough indicator that he could play in the NFL."

Two days after Jerome Baker said he wanted to finish his career with the Dolphins, the Dolphins gave a three-year contract extension to the fourth-year linebacker on Sunday.

NEW YORK — Saquon Barkley seemingly is vaccinated for COVID-19, because he watched Tuesday’s Giants minicamp practice from the cafeteria and interacted with colleagues with no mask on.