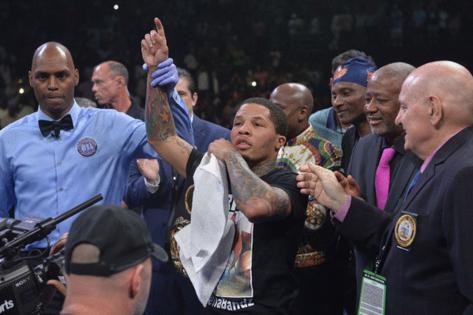 BALTIMORE — Sugar Ray Robinson is still considered the greatest pound-for-pound fighter of all time by many boxing historians.

Robinson was nigh unbeatable at welterweight (147 pounds) and middleweight (160 pounds), losing just once in his first 131 professional fights. On June 25, 1952, he challenged Joey Maxim for the light heavyweight (175-pound) title on a 103-degree night at Yankee Stadium. Using his superior speed and skill, Robinson built a lead on the scorecards. But all that dazzling motion, required to outbox the bigger Maxim, caught up with him in the oppressive heat. The best in the world ran out of gas, failing to rise from his stool to start the 14th round.

Since boxing’s golden age, stories such as Robinson’s have stood as cautionary tales for fighters who would chase glory against taller, heavier opponents. At the same time, many of the greatest — from Henry Armstrong to Sugar Ray Leonard to Manny Pacquiao — have burnished their resumes by winning championships and superfights across a wide spectrum of weight classes.

As a student of boxing legacies, Gervonta Davis is well aware of this. It’s why the Baltimore-born Davis will risk his undefeated record (24-0, 23 knockouts) Saturday night by moving up to the 140-pound weight class to fight undefeated Mario Barrios.

“They criticized ‘Tank’ for fighting a little guy in his last fight,” said Calvin Ford, Davis’ trainer and mentor since childhood. “So going into a new weight class against an undefeated guy, he’s just doing things that most guys at 130 and 135 aren’t doing, to make himself a household name. He’s chasing greatness.”

If the 26-year-old Davis needs a reminder of how well this approach can work, he need only look to his promoter, Floyd Mayweather Jr., who won titles all the way from 130 to 154 pounds. No one has ever made more money in the sport, and Mayweather never met the man who could make him pay for moving up.

There is risk, however. Davis has won his biggest fights and scored his most devastating knockouts — including his most recent last Halloween against Leo Santa Cruz — in the 130-pound class. The one time he fought for a title at 135 pounds, he struggled to finish wily veteran Yuriorkis Gamboa. Now, he’s moving up two classes from his familiar hunting ground.

That’s the attraction of this Showtime pay-per-view main event for those who’ve followed the arc of Davis’ career. Barrios doesn’t bring the name appeal or stylistic flair of other potential opponents such as Teofimo Lopez, Ryan Garcia or Devin Haney, but he does offer Davis a chance to stake out new ground.

“What makes this fight intriguing is that he jumped all the way up and is taking on a definitely good 140-pounder,” said Showtime analyst Al Bernstein, who will help call the pay-per-view. “Davis is a terrific fighter. If you just put them side by side and ask who do you think is a better fighter, more people would pick ‘Tank’ Davis, but what creates the element of doubt is that Barrios is taller, bigger and has been fighting at a higher weight class. That part could be a little daunting.”

Bernstein doesn’t see jumping weight classes as a substitute for fighting the best opposition, but in this era of boxing, when major fights are difficult to make for business reasons, it’s often the alternative top fighters such as Davis choose.

LEXINGTON, Ky. — Just as it has to be daunting for a contemporary author to choose to write about Abraham Lincoln, so must it be for documentary filmmakers to select Muhammad Ali as a subject.

When it comes to the two ...Read More

Don’t call it a comeback.

Boxer Oscar De La Hoya, who was set to return to the ring after 13 years next week, has been hospitalized with the coronavirus, he said Friday.

The formerly retired boxing champion announced his diagnosis in a series of ...Read More

What was made obvious in a unanimous-decision ...Read More