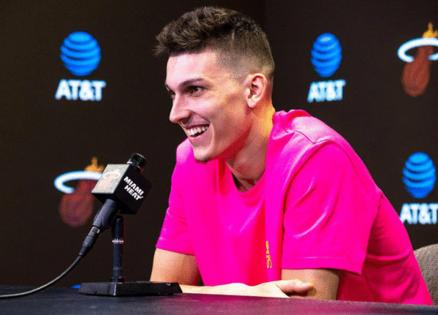 Another offseason, another summer of trade rumors.

That had Tyler Herro offering a resigned smile Tuesday at a Miami Heat back-to-school event at Target at Dadeland Station.

“I mean, every summer, that’s just what it is,” Herro said after helping a group of youths fill their back-to-school carts. “I mean, ever since I’ve been here, my name’s been in rumors.

The difference this time around is the rumors have come out of a position of value, with league front offices trying to come up with the best possible packages for the likes of Kevin Durant, Donovan Mitchell and others who have taken prominent positions in the rumor mill.

“As you get older and more years in the league,” said Herro, who was named last season’s NBA Sixth Man of the Year, “you realize this is what comes with the business. You could be in one city one day, the next city the next day.

“But at the end of the day, it’s about me and getting better every single day in the summer. Like I said, what team I’m on, I’m ready to play.”

This summer there also is a timing element also in play, with the streak-scoring guard eligible for a rookie-scale extension until the Oct. 19 regular-season opener.

Already locked into a $5.7 million contract for the coming season, Herro is eligible for an extension well in excess of $100 million, one that would begin in 2023-24.

However, once Herro signs an extension, he effectively becomes untradable until next summer due to a “poison pill” that would come with an extension.