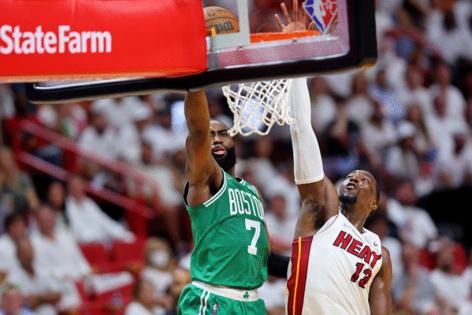 MIAMI — Miami entered these Eastern Conference Finals in the unusual predicament of being both a No. 1 seed and a clear underdog in the series, according to Las Vegas oddsmakers.

On Tuesday night, the Heat showed everybody what it can do with those odds.

Buoyed by a 22-2 stampede to start the third quarter, the Heat reversed momentum suddenly and adamantly, and dispatched the Celtics, 118-107, to take a 1-0 lead in the series.

As usual this postseason, Jimmy Butler spearheaded Miami with 41 points and across-the-board contributions, including exceptional defense. It was his third 40-point game in 12 playoff games this spring.

“I continue to play basketball the right way,” he said.

Down 62-54 at the break, the Heat followed its worst defensive half of the postseason (including 60 percent Boston shooting), with a defensive clinic to open the third, electrifying a sellout crowd at FTX Arena.

The Celtics shot 0 for 7 from the field with four turnovers during that 22-2 Heat avalanche to open the third, which included 11 points from Butler, two blocks and a steal from Bam Adebayo, stout defense by P.J. Tucker on Tatum, five points from Max Strus and a three from Gabe Vincent.

Boston didn’t hit a basket in the third until Robert Williams’ layup with 4:53 left in the quarter.

A 9-0 Celtics run then closed Miami’s lead to three, but the Heat revved up again, unleashing a 17-3 burst to push the lead to 93-76 after three.